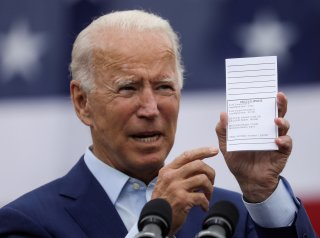 Democratic presidential nominee Joe Biden said Wednesday it is “almost criminal” and “disgusting” that President Donald Trump downplayed the risk of the coronavirus in public during the widespread pandemic.

The former vice president made the comments in an interview with CNN’s Jake Tapper in Michigan after journalist Bob Woodward released recorded interviews with Trump for his forthcoming book, “Rage.”

“This caused people to die. And what did he do the whole time?” Biden told Tapper. “He acknowledged this—you breathe it, it’s in the air—and he won’t put on a mask. He’s talking about, ‘It’s ridiculous to put on a mask, what do you need social distancing for? Why have any of these rules?’”

“It was all about making sure the stock market didn't come down, that his wealthy friends didn't lose any money and that he could say anything, that in fact, anything that happened had nothing to do with him,” he said.

Trump provided eighteen interviews for Woodward’s book, noting on Feb. 7 that the coronavirus “is deadly stuff” and one on March 19, he said, “I wanted to always play it down.” The news comes just two months before the upcoming election, where Trump’s ratings for his handling of the coronavirus have been consistently underwater.

“He waved a white flag. He walked away. He didn't do a damn thing,” Biden continued. “Think about it. Think about what he did not do. It's almost criminal.”

The recordings contradict what Trump has told the public in the past—that the virus is no more harmful than the annual flu.

Biden also blasted Trump for not implementing the Defense Production Act that would have boosted the production of protective medical equipment to help make the country better-equipped to tame the outbreak.

The former vice president also referred to the issue at a campaign event in Michigan, where he said “He knew how deadly it was. It was much more deadly than the flu. He knew and purposely played it down. Worse, he lied to the American people. He knowingly and willingly lied about the threat it posed to the country for months.”

The criticism will be difficult for Trump to dodge moving forward, especially at the first presidential debate on Sept. 29.

In response to the comments he made in the recordings, Trump told reporters Wednesday that he strived to “reduce panic” and that he doesn’t “want people to be frightened.”

“If you said in order to reduce panic, perhaps that’s so,” Trump said when asked if he downplayed the threat of the coronavirus pandemic.

“The fact is I'm a cheerleader for this country. I love our country,” he added. “I don't want people to be frightened. I don't want to create panic, as you say, and certainly, I'm not going to drive this country or the world into a frenzy.”