Breonna Taylor Is Another Victim of the War on Drugs 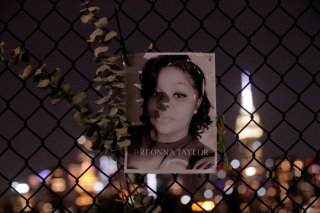 Yesterday Kentucky Attorney General Daniel Cameron announced charges against one of the three officers who killed Breonna Taylor, an emergency medical worker who was shot when police raided her apartment on the suspicion that her ex‐​boyfriend, Jamarcus Glover, had received shipments of drugs at her address. The charges, three counts of wanton endangerment, were not for shooting and killing Ms. Taylor in her own home but for firing three stray rounds through a curtained window. Whether the charges, or lack thereof, are the appropriate legal response lies outside of our particular expertise, but widespread protests in the wake of the announcement show that many people do not feel justice has been served.

The Drug War killed Breonna Taylor. Former Detective Brett Hankinson, Sergeant Jonathan Mattingly, and Detective Myles Cosgrove may have pulled the trigger, but they carried out this raid because of our misguided, ineffective, and racist drug laws. Since President Nixon first declared a “War on Drugs” in 1971, Black Americans have been arrested, jailed, and killed for frequently minor or nonviolent drug offenses. No‐​knock raids, in which police are authorized to enter a property without notifying the residents, have become a favorite tool of law enforcement, with tens of thousands executed each year.

Breonna Taylor was not the first innocent victim of a no‐​knock raid, and unless policymakers act she will not be the last. In March 1994 police in Boston entered the wrong apartment and tackled 75‐​year old Accelyne Williams, who suffered heart failure and died. No officers were charged. In May 2010 7‐​year old Aiyana Stanley Jones was shot and killed by police in Detroit during a botched drug raid as she lay asleep in bed next to her grandmother. Charges against the officer were dropped, and he remained on the force. In May 2011 26‐​year old Iraq war veteran Jose Guerena was shot at 71 times in front of his wife and 4‐​year old daughter. Police claimed he was involved in a drug trafficking ring – allegations that were never substantiated – and no officers were disciplined although his family received a $3.4 million settlement. There are far too many similar stories, not all of which receive the attention or scrutiny they deserve.

The Kentucky AG and others claim that the raid that killed Breonna Taylor was not, in fact, a no‐​knock raid because the police, despite having a no‐​knock warrant, announced themselves. Taylor’s boyfriend disputes this claim and says he thought the intruders were Taylor’s ex‐​boyfriend.

Regardless, the warrant was executed in the early hours of the morning as Ms. Taylor and her boyfriend slept; reacting defensively to heavily armed intruders breaking down doors in the middle of the night is a reasonable response. Using violent shock and awe tactics on people suspected of nonviolent offenses is not.

What many of these violent raids have in common is that they target low‐​level drug offenders. Dozens of raids have ended in injury or death since 2010. The aggressive enforcement of marijuana laws may be as dangerous as the drug itself.

Ending the War on Drugs will not eliminate police misuse of deadly force, but it will limit the ability of law enforcement agencies to use the pretext of “public safety” to commit violence. The Drug War must end; it has already claimed too many victims.