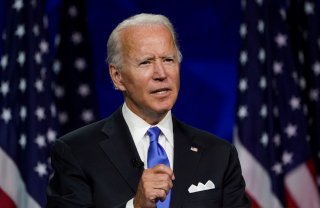 Democratic nominee Joe Biden’s presidential bid is gaining momentum from staffers and lawmakers on both sides of the aisle—a bipartisan push to remove President Donald Trump from office.

Staffers from former President George W. Bush’s administration, Senator Mitt Romney’s (R-Utah) presidential campaign and the campaign and Senate staff of former Senator John McCain (R-Arizona) have united to put Biden in the White House, a move that comes just before Trump is scheduled to give his nomination acceptance speech Thursday night at the Republican National Convention.

During a time of division in the Republican party with coronavirus relief package talks and Trump’s leadership, the initiatives launched by GOP staffers indicates an even deeper split within the party. Over 150 alumni representing Bush, Romney and McCain endorsed Biden this week in three separate letters.

“Joe Biden has proven himself over years of public service. We have seen him respectfully reach across the aisle, consider a different point of view and make a thoughtful decision to benefit the nation,” a letter obtained by POLITICO from Bush alumni supporting the former vice president said.

“In order to emerge strong and ready to tackle the challenges before us, we must act. We must step up, get out of our comfort zone, and vote for Joe Biden. It is time for us to have initiative in our communities and networks to stand up for character, integrity, decency, and leadership,” the letter added.

Another letter published Thursday morning, written by the group “Romney Alumni for Biden” and signed by thirty-four staffers from the Utah senator’s presidential campaign, emphasized that Trump’s values and rhetoric do not align with the traditional Republican ideals that the party represents.

“What unites us now is a deep conviction that four more years of a Trump presidency will morally bankrupt this country, irreparably damage our democracy, and permanently transform the Republican Party into a toxic personality cult,” the group wrote in the letter, published on Romney4Biden.com. “We can’t sit by and allow that to happen.”

Although Romney is not formally affiliated with the staffers’ letter, he has been an anti-Trump GOP leader since joining the Senate in 2018 and didn’t vote for the president in the 2016 election. The two have gone head-to-head in the past, with Romney voting to convict the president on an article of impeachment and Trump scolding the senator for losing the 2012 presidential election to former President Barack Obama.

More than 100 McCain Senate and campaign staffers also endorsed Biden Wednesday, noting in a letter published in a Medium blog post by “McCain Alumns for Joe Biden” that the Delaware Democrat’s leadership will help the country out of the coronavirus pandemic and the blistering economic crisis.

“We trust that as President, Joe Biden will lead an urgent, comprehensive national effort to contain the COVID pandemic,” the McCain alumni wrote. “We trust he will call on Americans to remember our common interests and responsibilities, and not worsen the grievances that have polarized our politics. And we trust that he will defend American interests and values from all enemies, foreign and domestic.”

The group added that Trump has failed to “uphold American values,” considering his poor leadership that diverged both sides of the aisle, rather than uniting them during a time of crisis.

Trump will end the convention Thursday night with his nomination acceptance speech, outlining his vision for his potential second term in the White House. Other speakers that will be featured at the last night of the convention are Senate Majority Leader Mitch McConnell (R-Kentucky), Sen. Tom Cotton (R-Arkansas), House Minority Leader Kevin McCarthy (R-California) and the president’s daughter and White House advisor Ivanka Trump.