Could the 2020 Election Give Birth to a Centrist Third Party? 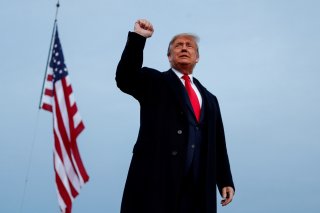 Look, I get it. I understand why Republicans want to take the opportunity to nominate a justice to the supreme court in the aftermath of Justice Ruth Bader Ginsberg’s death. But the way they’re going about it further highlights why people in this country hate politics (this is a GOP example; there is no shortage of Democrat examples).

Almost nine months before the 2016 election, President Barack Obama nominated Merrick Garland to replace Justice Antonin Scalia on the Supreme Court. Senate Majority Leader Mitch McConnell refused to act on the nomination, citing the “will of the people.”  Here’s what he said, with soaring rhetoric, after Obama asked McConnell to put aside politics and act on his nominee:

“The American people are perfectly capable of having their say on this issue,” he said, “So let's give them a voice. Let's let the American people decide. The Senate will appropriately revisit the matter when it considers the qualifications of the nominee the next president nominates, whoever that might be.”  The decision not to hold a hearing this close to the election, McConnell claimed, “remains about a principle, not a person.”

Now, of course, he’s singing a very different tune.  Instead of listening to the voice of the people in the coming election, McConnell wants to listen to the will of the people in the previous election and not wait to hear what the people will say in about a month and a half.  It’s a naked double standard.

“Americans reelected our majority in 2016 and expanded it in 2018 because we pledged to work with President [Donald] Trump and support his agenda, particularly his outstanding appointments to the federal judiciary, ” McConnell explained last Friday. “Once again, we will keep our promise. President Trump’s nominee will receive a vote on the floor of the United States Senate."

There is an entirely valid argument to be made that the Constitution and all U.S. laws gave McConnell the power to withhold a hearing to Obama’s nominee in 2016 and gives him power to give a hearing to Trump’s nominee now. If McConnell rested openly on that argument - and then grudgingly nodded his head to the Democrats the next time it was they who had the power to make a move based solely on power politics - people would still not like it, but they would at least understand the rules of the game apply equally to all.

But just like the Democrats are today gnashing their teeth about their fallout from their shortsighted decision in 2013 to remove the filibuster provision on federal judicial nominees, the Republicans will surely come to regret this shortsighted move in the future, as the Democrats will exploit their power the next time they are in the majority in the Senate (which could come could as early as November's election).

Just think: if the Democrats had not removed the requirement for at least sixty votes on federal justice nominees in 2013, then the GOP would not likely have had the political capital necessary to pass the “nuclear option” in 2017 that extended that same simple-majority standard to Supreme Court justices—and Republicans would not now have the power to approve a nominee over Democrat preference.

If the Republicans succeed in ramming through the nomination and confirmation of a conservative judge before the election, it will only continue the decades-long trend of one party hating the other. It will deepen the spirit of revenge within the parties that lose anything via a power-play, increasing the chances they eagerly seek opportunity for pay-back.

This dynamic further shrinks the already limited room for finding bipartisan solutions to the major problems vexing our country: a once-in-a-century pandemic, the worst financial crisis since the Great Depression, and civil and racial disharmony that could descend into violence not seen since the turbulent 1960s. No one party, no singular governing philosophy is capable of solving any of these extremely complex challenges.  In the current—and deteriorating—state of affairs, however, the term “principled compromise” has vanished from the lexicon.

Increasingly, elected officials that demonstrate a willingness to work with members of the opposition party are often accused of being fickle and inadequately “loyal” to their own side. In a society like ours that is filled with a broad diversity of races, religions, and generational views—not to mention even cultural divisions among several regions of the country—it is impossible for a single party to successfully govern the entire, diverse electorate.

If Republicans and Democrats continue trying to govern via zero-sum games and scorched-earth ways, then the U.S. government may eventually grind to a near-halt. Its most pressing needs will remain unmet and will instead fester, causing harm to everyone. Heading into this election, increasing numbers of both the Right and Left are warning of violence if the election doesn’t go their way; in fact, we are seeing increasing levels of violence already as we close in on election day.

Without immediate, substantive, and sustained changes, our deteriorating political environment is going to take our country someplace very dark. The best remedy is for the leaders of each party to recognize the self-destructive nature of their ways and make the principled compromise necessary to get us out of the ditch we’ve dug for ourselves.

But we all know that’s not going to happen; neither side is going to willingly cede an inch to the other.

The last time this level of political demoralization happened, the Republican Party displaced the Whigs.  Polls have for many years shown that Americans are increasingly open to a new party, but up to this point, there has been grudging acceptance that somehow the two-party system will find a way to extricate itself from the morass.  In 2020, however, fewer dare to harbor such hopes.

This two-party dysfunction may soon force on the American people a stark choice: take the risk of holding on to the stiff-necked, obstinate system of Republicans and Democrats—or take the risk of giving a new centrist party a viable chance. If inertia is allowed to continue unchecked, however, then the entropy of the current system could soon grind effective governance to a complete stop, infuriating millions in this country. The resulting political earthquake could change the face of American politics forever.