Could Donald Trump Really Pardon Himself? No One Is Really Sure. 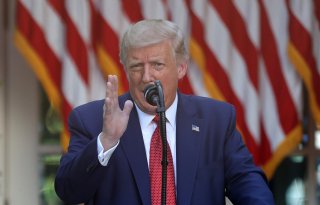 Does the Constitution grant a president the power to pardon her or himself? Unfortunately, it’s unclear, legal experts say.

Two years ago, President Donald Trump tweeted that he has “the absolute right to PARDON myself,” but the answer still remains unknown.

“Anyone who says that there’s a clear answer is wrong, or they’re being an advocate, and they think that if they say that it’s clear, and it’s obvious, that that’ll make their position more persuasive,” Brian Kalt, author and law professor at Michigan State University, said in an interview.

Article II, Section 2 of the Constitution allows the president to “grant Reprieves and Pardons for Offenses against the United States, except in Cases of Impeachment.” Pardon power is one of the few executive decisions a president can make without Congress’ approval. Congress has the right to declare war and to approve or disapprove of presidential appointments.

George Mason, however, feared for an abusive president that “may frequently pardon crimes which were advised by himself.” But, the Framers believed that they placed limitations on the president’s pardon power by using impeachment and removal from office.

Trump’s tweet about his pardon powers and later questions to his lawyers about these powers have posed questions about his innocence and guilt.

House Speaker Nancy Pelosi is seeking to limit presidential pardon power after Trump commuted Roger Stone’s sentence last week. In a Republican-controlled Senate, it is unlikely that this type of legislation would pass.

"Congress will take action to prevent this type of brazen wrongdoing. Legislation is needed to ensure that no President can pardon or commute the sentence of an individual who is engaged in a cover-up campaign to shield that President from criminal prosecution," Pelosi said in a statement.

“The view that the president has the power to pardon himself contradicts a central tenet of American democracy: ‘No man is above the law.’ In a democracy based on the rule of law, no one may engage in criminal conduct with impunity, including the president of the United States,” Jimmy Gurulé, a law professor at the University of Notre Dame, told Vox.

Exercising pardon power isn’t uncommon. There’s been a long history of relieving others of crime in the US when George H.W. Bush pardoned former Defense Secretary Casper Weinberger, Bill Clinton pardoned around 140 people including Marc Rich and Roger Clinton and Gerald Ford pardoned Richard Nixon for every federal offense he “committed or may have committed” during his time as president.

There’s never been a case where the president attempted to pardon himself, but Nixon did consider it after consulting with lawyers. If, however, a president pleads to self-pardon in court, Kalt said the president’s argument would be “very simple” because there is “nothing in the Constitution that explicitly forbids it.”

Despite this argument, Kalt, Gurulé and other legal experts agree that the decision to self-pardon would make the president look corrupt, transform the associated party and is a clear admittance of guilt.

“A president isn’t going to do this unless he really has nothing to lose,” Kalt said.