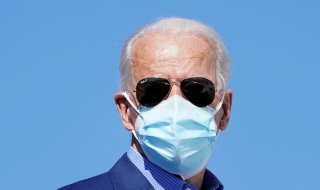 Republicans continue to press Democratic nominee Joe Biden and running mate Sen. Kamala Harris (D-Calif.) in recent days over whether the pair would “pack” the court if conservative-leaning Amy Coney Barrett gets a seat on the bench, a question that the two have avoided to answer. If the Democrats were to proceed with court-packing, it would represent a momentous step that would erode another guardrail of American democracy and turn the court into a rubber stamp for the president rather than a separate branch of government. The last time it was attempted was in 1936, when Franklin Roosevelt suffered a humiliating defeat in Congress after he tried to add new members to the Supreme Court. Would Biden and the Democrats seek to go down the same road?

Biden faced the court-packing question at a campaign stop in Phoenix on Thursday, providing yet another bland response. “You will know my opinion on court-packing when the election is over,” Biden told reporters at Phoenix Sky Harbor International Airport. “The moment I answer that question, the headline in every one of your papers will be about that rather than focusing on what’s happening now. This election has begun. There’s never been a court appointment once the election has begun.”

Court-packing — a radical idea that broadens the highest court by adding more judges than what exists now — would tilt the Supreme Court to be more left-leaning if Biden is elected and Democrats rally enough federal level support to pass the law. Although the constitution doesn’t state how many justices must sit over the court, Republicans argue that there have been nine justices on the Supreme Court for well over a century, so swelling the bench would radically interfere with the highest court’s practice and history.

“I think the reason they won’t answer it is because their answer is yes,” Sen. Ted Cruz (Texas) told the Daily Caller on Thursday, “and they know that’s incredibly impossible so they’re trying to hide just how radical their agenda is.” “They are ready to pack the court. If they win, if they take a majority, if we have Biden, Schumer and Pelosi in charge, I believe they will pack the court,” Cruz added.

At the vice-presidential debate Wednesday night, Vice President Mike Pence pressured Harris to provide a clear answer if the Democratic ticket plans to pack the court, accusing her of giving a “non-answer” when asked about the issue in the past. Harris refused. “The American people deserve a straight answer,” Pence said. "And if you haven’t figured it out yet, the straight answer is they are going to pack the Supreme Court if they somehow win this election.”

The issue of court-packing resurfaced after Justice Ruth Bader Ginsburg died in mid-September when Senate Majority Leader Mitch McConnell (R-Ky.) vowed to push for President Donald Trump’s Supreme Court nominee before Election Day. If the Republican-controlled Senate passes Barrett’s nomination, she would become the third Supreme Court justice appointed by Trump and potentially impose an ideological tilt that would put conservatives in power on the bench, 6 to 3.

Senate Minority Leader Chuck Schumer (D-N.Y.) told his colleagues that “everything Americans value is at stake” if Senate Republicans convene to fill Ginsburg’s seat, as the lifetime appointment would mend ideology on the highest court for generations. Schumer, who potentially faces a challenge from AOC in 2022, moved decisively to the left: “Let me be clear: If Leader McConnell and Senate Republicans move forward with this, then nothing is off the table for next year. Nothing is off the table.”

McConnell, the leader of the effort to swiftly fill the vacant seat, has been labeled as a hypocrite by Democrats because he blocked Merrick Garland, an appeals court judge, when former President Barack Obama nominated him to succeed Justice Antonin Scalia after he passed away in February 2016, arguing that the nomination should wait until after voters decide the 2016 election. The majority leader added that a vacant Supreme Court justice seat should not be filled during election season, a reversal from his initiative now.

Whether Biden and Harris will seek to pack the court if Barrett is granted the seat, in the event that the Democratic ticket wins the election. Nearly 11 candidates during the Democratic presidential primaries were open to the idea of court-packing, including Harris. Biden, however, did not support it “because we’ll live to rue that day,” he said last July. “We add three justices; next time around, we lose control, they add three justices,” Biden said last October. "We begin to lose any credibility the court has at all.”

If Biden provides a clear indication that he intends to pack the court, the stance would likely deter moderate or independent voters that he needs to win the tight race to the White House. In recent weeks, Biden said giving a response to the question “will shift the focus” of the election.

“That’s what [Trump] wants. He never wants to talk about the issue at hand and he always tries to change the subject. … The discussion should be about why he is moving in a direction that’s totally inconsistent with what the founders wanted. The Constitution says voters get to pick a president who gets to make the pick and the Senate gets to decide,” Biden told WBAY News last month. “We’re in the middle of the election right now,” he added. "You know, people are voting now. By the time this Supreme Court hearing would be held, if they hold one, it’s estimated 30 to 40 percent of American people already have voted. It is a fundamental breach of constitutional principle. It must stay on that and it shouldn’t happen.”

As the Barrett hearings next week loom large, however, Republicans will turn up the heat on Democrats over their court-packing plans. It could prove to be a potent political weapon in a turbulent election.