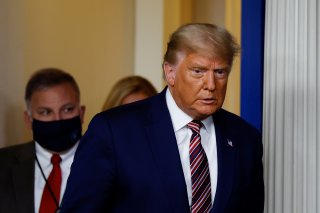 Fox News’s Brett Baier says “we have not seen the hard evidence” of voter fraud. Karl Rove observes, “stealing hundreds of thousands of votes would require a conspiracy on the scale of a James Bond movie. That isn’t going to happen.” But that didn’t stop President Donald Trump from declaring last night that it’s widespread.

Trump’s remarks were met with widespread liberal consternation and handwringing. But the truth is that he didn’t really pursue his case with much vigor. If anything, he seemed deflated and subdued. Trump did not explain what motivation Republican state officials in Georgia would have had to alter the vote on Joe Biden’s behalf. He did not explain why he was exempting Arizona from his call to stop counting votes. He did not explain why Republican Senate and congressional candidates did so well if the vote was rigged. The impression he left was that in states where he’s doing well, it’s OK to keep counting. In states where he’s not, the counting should end. He did not, in short, produce any actual evidence of a stolen election other than to suggest that the very act of a mail-in ballot likely constituted fraud. If so, my 87-year-old father, who didn’t want to stand in line because of the pandemic and who mailed in his ballot in Pennsylvania in a double-sealed envelope several weeks ago, is among those guilty of it.

But Trump has probably already realized that he has lost the election even if he doesn’t want to acknowledge it publicly. He has to be thinking about two things: how to make life miserable for his successor Joe Biden and how to manage his own post-presidential career. It seems pretty clear that Trump will declare that he is going to run again in 2024, whether he really intends to or not, and that he will seek to function as a monarch in exile at Mar-a-Lago.

Trump will miss the trappings that came with the presidency, but he can continue to hold rallies for his followers. Republican legislators, particularly those who are eyeing their own runs for the presidency—Marco Rubio, Ted Cruz, Nikki Haley, among others—will seek to court him. If he can drag out the court proceedings against him long enough, or even prevail, Trump will function as a power broker in the GOP. The fact is that while Biden is likely to score well, obtaining up to 306 electoral votes, he did not win a landslide. If anything, the Republican party, which made inroads into minority voters, could be well-positioned for upcoming elections.

The Democrats are not. With Biden as president, he will inherit the problems that Trump has left behind—a pandemic, a massive budget deficit and a faltering economy. The Senate Republicans, led by majority leader Mitch McConnell, will be in no mood to compromise. Nor will a conservative-dominated Supreme Court.

Right now, Trump will almost surely focus on insinuating as many of his appointees as possible into the civil service and on refusing cooperation, as far as possible, with the Biden transition team. He can try and drag out the election result with a barrage of lawsuits. But once he has accepted his defeat, Trump will turn to his true goal—plotting his revenge against Biden.