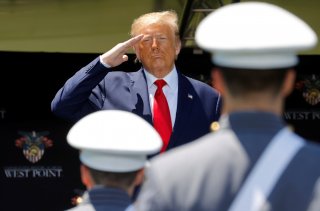 President Donald Trump’s favorability rating dropped by more than 8 percent since 2016 among U.S. active-duty troops, according to a new poll released last week.

The results revealed that Trump’s favorability rating is at 37.8 percent, a figure that’s steadily declined over the last four years, as 46.1 percent of troops surveyed in the same poll in 2016 had a favorable view of the president, according to a poll conducted by The Military Times in partnership with Syracuse University’s Institute for Veterans and Military Families (IVMF).

Conducted before the coronavirus revised political conventions, the results threaten Trump’s claims that he has substantial support from military members.

“It’s fair to say that Trump is not as popular as Republican nominees have been in the past among this group,” Peter Feaver, a White House adviser to former President George W. Bush, who currently works as a political science professor at Duke University, told The Military Times. “The bottom line is that in 2020, Trump can’t be claiming to have overwhelming support in the military.”

The Republican party has consistently received military support as a strong part of their voter base, so tanking popularity for Trump’s candidacy could be detrimental to his reelection bid, as well as the GOP as a whole.

The results also showed a clear employee divide, as more than 59 percent of officers said they had a poor view of Trump and 47 percent of enlisted respondents said they had an unfavorable opinion. The Military Times noted that enlisted military members generally have a more favorable view of the president than officers do during the last four years.

Although the poll indicated less favorability towards Trump among U.S. troops, a spokesperson for IVMF said that the survey doesn’t have an accurate public opinion of the entire military force, as the average participant age was thirty-nine years old and the poll “is a good sample of the career-oriented military members’ views, which may be different from the junior enlisted view of things.”

The Military Times poll in partnership with Syracuse University’s Institute for Veterans and Military Families surveyed 1,018 participants from active-duty troops between July 27-Aug. 10 with a margin of error for most questions being less than 2 percent.