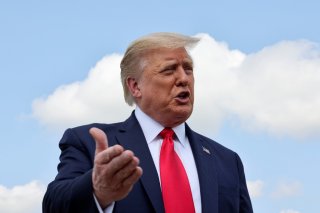 Donald Trump has gone broke before. Is he about to do it again?

His presidential campaign has apparently burned through almost $800 million of the $1.1 billion it raised, including wasting 11 million on Super Bowl ads and another 4 million at Trump hotels and restaurants. Meanwhile, the Biden campaign, which has been focusing on Zoom events, in contrast to Trump who despises them, raised a record $365 million in August. The Trump campaign raised $165 million in July has not yet released its numbers for August, with the president apparently unhappy with the results.

Perhaps none of this should really come as a surprise. Trump, the most gifted pitchman in American history, a branding genius who eclipses any other celebrity, has moved on seamlessly from one bankruptcy to the next, always promising greener vistas just beyond the horizon, only to decamp once things get ugly, whether it’s Trump University or his United States Football League team. Now the presidency itself serves as his personal soapbox with the White House essentially conscripted into Trump enterprises. The recent Republican Convention showed just how far Trump has amalgamated the GOP itself into the family brand. Family members predominated; politicians were scarce. The GOP has become Trump’s own brand and he hopes to pass it on to his heirs as a kind of personal family trust.

But fiscal cracks are already starting to show up. It isn’t just that America itself is about to run a federal debt exceeding its GNP. It’s that Trump’s own campaign, which has traditionally served as a marker for a politician’s ability to govern, may be going belly-up.

Trump himself is reportedly considering pumping $100 million of his own money into the campaign, though he has always been loath to use his own funds. At the same time, he’s conceding nothing publicly. In a tweet this morning, Trump declared, “My Campaign spent a lot of money upfront in order to compensate for the false reporting and Fake News concerning our handling of the China Virus. Now they see the GREAT job we have done, and we have 3 times more than we had 4 years ago--& are up in polls. Lots of $’s & ENERGY!”

Energy, shmenergy. Put aside Trump’s habitual braggadocio and something else emerges. The blame game among the Trump palace factions is already starting. A long piece in the New York Times had former campaign head Brad Parscale, who once called the campaign an “unstoppable juggernaut,” pointing the finger at the Trump family. The literal money quote in the Times article from Parscale is this: “I ran the campaign the same way I did in 2016, which also included all of the marketing, strategy and expenses under the very close eye of the family. No decision was made without their approval.” It’s also the case that Trump has lavishly tapped campaign funds to pay his legal bills, raising eyebrows inside and outside the GOP.

For now, Parscale is taking the rap as it were. He seems to have blown $350 million on fundraising efforts alone, not to mention a car and driver for himself. The former favorite of Jared and Ivanka has been demoted and replaced by Bill Stepien, who is an experienced hand and has taken a pay cut. Whether Parscale ever had the prowess to run the re-election campaign is dubious; he may have gotten lucky the first time, but his lack of experience showed up the second time around against a more resolute candidate like Joe Biden. Add in the proclivity for spending large and you had a recipe for disaster.

Stepien’s mandate is to rescue the campaign in part by slashing expenses. But can Stepien bailout the campaign? Or is he simply rearranging the deck chairs on the political equivalent of the Titanic? The answer will be largely be determined by Trump who, it must be remembered, has never proven more agile or cunning than when he is on the defensive.