Donald Trump Attacks AOC, Kamala Harris and Nancy Pelosi (All in One Day) 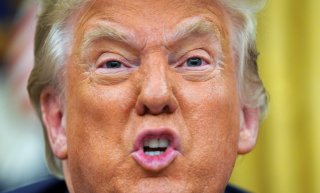 Sen. Kamala Harris (D-Calif.), House Speaker Nancy Pelosi (D-Calif.) and Rep. Alexandria Ocasio-Cortez (D-N.Y.) were just a few of the women he attacked, as well as an MSNBC host.

"Now you have a, sort of a mad woman I call her, because she was so angry and such hatred with Justice [Brett] Kavanaugh," Trump told Fox Business Network in an interview, referring to Harris. "She was the angriest of the group, and they were all angry."

"There was nobody meaner or more condescending to Slow Joe, not even me, and yet she quickly evaporated down to almost zero in the polls. Bad!" Trump added.

The president also told Fox that the GOP will win back the House since Pelosi is “stone-cold crazy,” even though the two haven’t spoken in months as their polarizing political views have empowered their ability to convene and talk with each other  — even during a public health crisis.

"AOC was a poor student. I won’t say where she went to school, it doesn’t matter," Trump said. "This is not even a smart person, other than she’s got a good line of stuff. I mean, she goes out and she yaps. These guys, they’re all afraid of her."

"Let’s make a deal, Mr. President: You release your college transcript, I’ll release mine, and we’ll see who was the better student. Loser has to fund the Post Office," she tweeted, referring to Trump’s refusal to provide funding for the US Postal Service just before the presidential elections where offering mail-in voting has been in the talks.

Trump’s remarks about the three women come after a series of tweets and attacks against Harris’s candidacy as vice president. Just hours after receiving the running mate spot, Trump tweeted a video, dubbing Harris as a “phony” and a member of the “radical left.”

The president’s campaign insists that Harris must be prepared to “answer the tough questions”.

The president’s remarks bashing female politicians could tamper his overall voter support from women, as a Monmouth University poll reported this week that he trails behind Biden among women, standing at 32 percent of support, while Biden has 61 percent.

Another poll, conducted by CBS News Battleground Tracker found that Biden leads Trump in Florida, Texas and Arizona among women likely voters — which are crucial states needed for Biden to steal the White House.