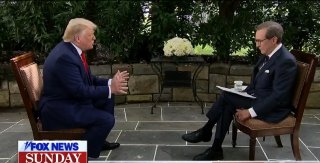 President Donald Trump sat down with Fox News’ Chris Wallace on Sunday in a fiery interview that covered coronavirus arguments, the reopening of schools, recent polls and the upcoming presidential election.

On “Fox News Sunday,” Wallace showed statistics regarding coronavirus cases and deaths in the US, revealing that the country has the seventh-highest global mortality rate. In response to the statements, Trump disputed the journalist’s claims and said the statistics are misleading.

“I think we have one of the lowest mortality rates in the world,” Trump said. Wallace and Trump’s data are different, as the Fox News host presented figures from Johns Hopkins University, whereas the White House depends on the European Centre for Disease Protection and Control, a source that omits certain countries from its charts.

Trump also threatened to defund schools that don’t reopen in the fall, a push that he’s made public on Twitter.

“I'm not losing, because those are fake polls. They were fake in 2016 and now they're even more fake,” the president said. “I have other polls that put me leading, and we have polls where I'm leading. I have a poll where we're leading in every swing state.”

Trump continued to say Biden is “not competent to be president” and that he’s “mentally shot.”

“Let Biden sit through an interview like this, he’ll be on the ground crying for mommy. He’ll say, 'Mommy, mommy, please take me home,'” Trump said. He also challenged Biden to take a cognitive test - the same test Trump took about a week ago.

Wallace said he took the same test, but claimed, “it’s not the hardest test.”

The president also insisted that Biden had called for defunding the police in a “unity task force” created by him and Vermont Senator Bernie Sanders, a former Democratic presidential candidate. Trump signaled to one of his off-screen aides to get a copy of the document to prove the defunding measure. Wallace consistently interjected Trump’s claims, saying the document doesn’t support that.

After receiving the document, Trump read lines from it, with none of them mentioning defunding the police.

Trump also said that if Biden wins the upcoming presidential elections, the Vice President will “destroy this country” because of the “radical left,” a more progressive part of the Democratic party. He went on to say the US will not have water, food and medicine “if he wins.”