Donald Trump Has a Clear Path To Victory in November 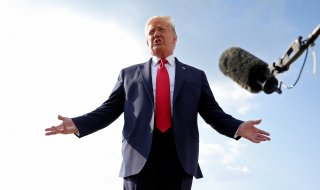 It was an ominous July for the Republican presidential candidate. The media stood in uniform opposition to his candidacy. The Democrats had nominated a liberal, but one who struck many voters as sufficiently experienced and likable. A Gallup poll showed the Democrat leading 55-38 percent, and pundits confidently predicted the end of a Republican era amid fatigue and scandal.

What can look like a settled race often is not. Proving this twice, Bush went on to achieve the highest popularity in the history of presidential polling after victory in the 1991 Gulf War but lost to Bill Clinton the next year.

One key to Bush’s success was convincing voters he had the fight in him to succeed Ronald Reagan. Bush got tough, including by having his campaign criticize his opponent for giving a weekend “furlough” to a convicted murderer who used the break from prison to kidnap and rape a woman, and stab her boyfriend. Earlier in the year, Bush ridiculed left-wing CBS News anchor Dan Rather on live TV. Tactics like these succeeded in redefining the race.

President Donald Trump is in worse shape than Bush, not because of the deficit in polls, but because of a prolonged losing streak, including for factors beyond his control. Some say that the coronavirus pandemic and more recent radical wave and demands for social justice simply don’t play to Trump’s advantages.

But there is more to it than that. Beltway Republicans should be terrified by the upset primary victory of Lauren Boebert in Colorado, where she defeated five-term Congressman Scott Tipton. A key part of Boebert’s campaign was criticizing the government’s decision to flatten the economy as part of the reaction to the coronavirus crisis.

Across America, among many conservatives, there is smoldering rage at the inability of Beltway Republicans to protect them against the authoritarianism and anti-American radicalism of recent months. The fact that this is dismissed or ridiculed by the media does not make it less significant, as Boebert’s victory demonstrates.

It doesn’t take a constitutional lawyer to understand that orders by governors, mayors, and unelected public health tyrants to close churches and ban peaceful protests seeking to reopen the economy were unconstitutional. It just requires the ability to read the First Amendment. While authorities can use moral suasion to encourage people to stay home, they cannot order it. Where were Beltway Republicans when, for example, the cops in Raleigh tweeted that “Protesting is a non-essential activity” and arrested decent people for asserting their rights?

Worse still are the frequently law-breaking protests and riots staged by Black Lives Matter, a radical group that advocates violent revolution and killing police. Republican Senator Mitt Romney of Utah marched with group, and Republican Senator Mike Braun of Indiana said he supports them. (To his great credit, Vice President Pence has refused to be frog marched into parroting the group’s mantra.)

Tied inextricably to this wave of intimidation is the Orwellian attempt to cancel or fire anyone who has committed a thoughtcrime against the McCarthyite zeitgeist blowing through our culture, including just for saying things like “all lives matter.” Radicals also claim falsely that America is a racist nation and are trying to redefine our history to crush the very idea of America. Where are Beltway Republicans as thugs engage in this effort and destroy our great heritage?

Republican Senators James Lankford (Oklahoma) and Ron Johnson (Wisconsin) have proposed to eliminate Columbus Day as a holiday to appease the mob. Republicans who control the Senate Armed Services Committee gave in to a demand by Senator Elizabeth Warren (D-Massachusetts) to rename military bases named after confederate officers. They are joined in their zeal to appease by Rep. Mike Garcia (R-California). Will our soldiers soon be reporting to Fort Hillary?

Meanwhile, amid this insanity, Senate Majority Leader Mitch McConnell (R-Kentucky) tweeted a condescending missive to embrace wearing face masks. That some Republicans support this practice and others do not is less relevant than the tone-deaf scold itself, which came after months of proof that our political class knows less than nothing about defending America from foreign pandemic.

The White House and Trump’s campaign are convinced the election will center on jobs, China, and law and order, each of which favors Trump over his opponent. They are right on the first two, but “law and order,” does not capture the third element.

That most important element is reminding voters that Trump is the man to defend them and the American way against the mob. At times that means stopping violent protesters from looting, blocking traffic, terrorizing decent people, and destroying statues. But it also means defending the Constitution from those effecting tyranny under the banner of public health, defending beleaguered big city cops, and using the full power of the federal government to undermine the woke mobs sweeping our culture and economy.

As part of this, Trump should criticize weak Beltway Republicans who have proven once again they are useless in a crisis. They are increasingly likely to lose big anyway and Trump may be more effective in clarifying and defending the idea of America with a Democratic Congress as a foil, as opposed to one with a threadbare and largely pointless Republican majority in one house. Unshackled from the need to legislate, Trump and an energetic minority of fighters can have a decent shot at defining and defending the American way. That is his ticket to reelection.