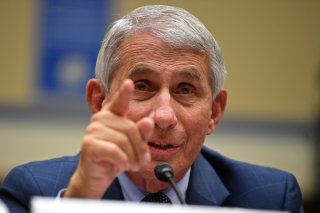 President Donald Trump hinted at a campaign rally late Sunday that he may fire Dr. Anthony Fauci after the presidential election, adding to what looks like an ongoing feud between the two.

After a packed day of campaigning, Trump’s remarks came at a rally in Opa-Locka, Fla., where the crowd burst out in chants screaming, “fire Fauci.”

"Don't tell anybody, but let me wait until a little bit after the election," Trump said to the crowd, full of unmasked supporters.

Trump also blasted Fauci’s credibility, particularly for his changed stance on wearing masks to combat the spread of COVID-19. The president went on to say that Fauci disagreed with his decision to restrict travel from China, even though the top health official publicly supported it.

Would He Do It?

It’s unclear how serious Trump’s suggestion is to end Fauci's time as being the director of the National Institute of Allergy and Infectious Diseases. Also, it should be noted the president does not have the direct power to remove Fauci, a career civil servant, from his position. Trump can, however, have a relevant appointee fire him, but Fauci can appeal the removal due to career federal government employee protections.

But the president recently signed an executive order that could possibly “put Fauci in a position where the President could fire him,” according to Robert Y. Shapiro, professor and former chair of the department of political science at Columbia University, as the order makes it less complex to dismiss career federal employees from their positions.

“It would be a bad move for the country since Fauci is a capable scientist, unless his replacement was equally capable,” Shapiro said. “But it would be seen as a completely political move and not what presidents should be doing. The President should be focusing on dealing better with the pandemic.”

“It seems like a terrible idea. First, the administration isn't exactly rolling deep with qualified experts. Second, people's confidence in the administration's decision-making in the public-health sphere -- and that extends to FDA approval processes -- is, for good reason, limited, and would plummet if Fauci were removed from the process,” Stan Veuger, a resident scholar at the American Enterprise Institute, said.

The move would likely receive pushback from top Democrats and voters from both sides of the aisle, as Fauci’s job in handling the coronavirus received majority support from Democrats, Republicans and Independents, according to a recent poll.

What Created the Latest Fauci vs. Trump Spat?:

Trump’s comments late Sunday come after Fauci criticized the president’s handling of the pandemic, noting that the country “could not possibly be positioned more poorly.”

“We’re in for a whole lot of hurt. It’s not a good situation,” Fauci told The Washington Post. “All the stars are aligned in the wrong place as you go into the fall and winter season, with people congregating at home indoors. You could not possibly be positioned more poorly.”

The White House swiftly responded to Fauci’s remarks, accusing him of “playing politics” just before the election.

Both Trump and Fauci have continuously collided with each other, as the health expert has publicly condemned the president for holding crowded rallies despite surging coronavirus cases, and Trump has repeatedly downplayed the severity of the deadly disease.

The president has also made rough assertions that he is irritated with his FBI director, attorney general and other leaders of health agencies, all workers that could potentially be in the hotspot if Trump gets re-elected.