Donald Trump's 2020 Election Nightmare Has Arrived: He Is Losing Texas 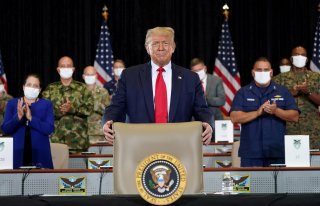 The poll, conducted by the Dallas Morning News/ University of Texas at Tyler, revealed Biden had 46 percent support, whereas Trump had 41 percent. The statistics are slightly different than a similar survey recorded in April, with Biden and Trump tied at 43 percent.

Trump’s growing disapproval in a normally red state shows Texas’ discontent over the president’s grip on the coronavirus pandemic.

Biden’s increasing support in the state is from independent and “weak partisans,” Kenneth Bryant Jr., a UT-Tyler political scientist involved with conducting the poll, told the Dallas Morning News.

“While President Trump has and still enjoys near-universal approval from Republicans, and overwhelming disfavor from Democrats, he has lost considerable ground among the folks in the middle, who may ultimately decide who wins Texas in November,” Bryant said.

Abbott started to encourage Texans to wear a face mask to tame the spread of the virus. He hasn’t, however, imposed a statewide mask mandate.

“Wearing a face covering in public is proven to be one of the most effective ways to slow the spread of #COVID19 while continuing to keep Texas businesses open. Texans should wear a face covering for the health of their families, friends and for all fellow Texans,” he tweeted.

Biden’s campaign hasn’t revealed any large-scale plans to soak up more votes in Texas, as the state hasn’t voted for a Democrat since Jimmy Carter in 1976.

In a poll released by CBS News on Sunday, statistics show Trump leading in Texas at 46 percent with Biden trailing closely behind at 45 percent.