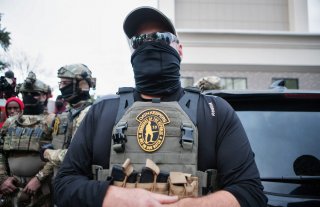 “We appreciate you guys. We really do.” A police officer in Kenosha, Wisconsin said these words to a group of armed civilians on the night of August 25. Some, including members of the 3,000-person Kenosha Guard, were there for the declared purpose of helping the police restore order. By the end of the night, two people were dead at the hands of Kyle Rittenhouse, a young man among that group of armed civilians. Video recordings from that evening allegedly capture individuals discussing how police planned to push protesters towards militia members “because you can deal with them.” As civil unrest has spread across the country in the wake of George Floyd’s death in Minneapolis, there have been increased interactions between members of self-styled militias, law enforcement, and the public. In certain instances, police have welcomed these groups in the face of hostile, but peaceful, protests at best, and violent rioting at worst.

States face a dilemma when using proxy forces to achieve their political ends; namely, ensuring proxies adhere to state policies and effectively employ violence to meet those goals requires the physical presence of the very military forces that proxies are meant to replace. After all, the aims of proxies rarely align perfectly with their sponsors, whether on an ideological or transactional basis; so, the more freedom proxies enjoy, the further they will drift. Of course, the use of proxy forces is not limited to conflicts abroad. On the contrary, civil unrest and civil wars are rife with state-aligned militias that serve many of the same purposes as proxy forces in foreign wars. However, these militias represent a Faustian bargain for the state and further demonstrate the proxy dilemma. In this case, the greater the reliance on militia groups rather than official security forces, the greater the risk of exacerbating the civil unrest and complicating the post-conflict reconciliation. Furthermore, legitimizing these groups’ violence outside the state’s command structure inherently delegitimizes the central claim of any government as the sole law enforcement authority. In this way, militia groups willing to do violence in service of the state, but without being subject to its constraints, do the state long-term harm for which their short-term benefits do not account.

States claim legitimacy from an ability to perform three central tasks: enforce laws, administer legal recourse, and provide public goods. This model of empirical statehood requires the centralization of authority under the Weberian construct of monopolizing violence. That is, only the state may send a person in a uniform with a gun to your front door to enforce its rules. Violent protests and riots highlight a state’s inability to perform those three core tasks and erode the legitimacy to govern that the state enjoys. When a situation devolves further to civil conflict, a challenger emerges seeking to replace the state as that arbiter of legitimate violence. While the United States is not nearly to the point of civil conflict or insurgency, an examination of state-aligned militias and their historical use offers a warning against a state tolerating or encouraging militia violence in its service.

Subcontracting the Monopoly of Violence

While certainly not the case in every scenario, the state often has institutional advantages during civil conflict. For example, the state can leverage organized, trained, and equipped security forces, interconnected networks of government agencies, and domestic and international mechanisms to fund the war effort. However, those institutional advantages are at times not enough to combat the challenge of civil conflict, and the state is unable or unwilling to restore order throughout the entirety of its territory. In the face of this challenge and often in response to increased local violence, militia groups arise both organically and with state support to provide security when the state fails to do so. When this occurs, the state is tempted to use these militias to supplement its uniformed security services in direct support of its objectives.

However, if the state decides to “subcontract” its monopoly of violence to state-aligned militias, then it risks a severe principal-agent problem. Traditionally, the self-interest of the agent at the expense of the principal’s objectives is the crux of this problem. So, principals only choose to assume this risk and delegate authority to agents when there is an assessed comparative advantage for doing so. When using proxy groups abroad, this comparative advantage includes niche capabilities: access to areas denied to the state and plausible deniability of the proxy’s actions. Domestically, the state may choose to use militias in a similar way: in the pursuit of local control in areas difficult for security services to access, or to deny state involvement in local violence that it views as strategically useful, but problematic in terms of reputational costs.

However, therein lies the principal-agent problem that the domestic application of proxies creates. Whereas the use of proxies abroad extends the state’s ability to project power to its benefit, the same use of proxies domestically fundamentally undermines the state’s claim to monopolize violence. Similarly, it is more difficult for the state to disassociate itself with the violence aligned militias commit domestically, since those activities support state objectives and occur in areas over which the state claims to exercise authority. Finally, militia groups do not necessarily disband following the cessation of hostilities, even when the state remains in power. This creates problems from both a law enforcement and transitional justice perspective as the state attempts to disarm, demobilize, and reintegrate former insurgents. In fact, the reticence of state-aligned militias to go through the same process and be subject to the same legal scrutiny as former insurgents puts post-conflict settlements at risk. Former insurgents and their supporters may view the lack of accountability for the transgressions of state-aligned militias as a renewed grievance for which a segment of the population may resort to violence once again.

The cases of Northern Ireland and Colombia exemplify the tenuous and problematic relationship between the state and aligned militias. Starting in the 1980s, insurgent groups including the Fuerzas Armadas Revolucionarias de Colombia (FARC) and the Ejército de Liberación Nacional (ELN) challenged the Colombian government for control of the country. For both groups, this included attacks against local security forces and their outposts, seizure of territory, attacks against pro-government populations, kidnappings for ransom, and heavy investment in the drug trade. This violence inspired the formation of local self-defense militias, many of which eventually aligned with the Colombian government under the Autodefensas Unidas de Colombia (AUC) banner. The AUC supplemented the Colombian military, especially in rural and mountainous areas difficult for the security forces to access on a persistent basis. However, the AUC was responsible for the killing of more than 19,000 people in areas sympathetic to the FARC, including 804 assassinations, 203 kidnappings, and 507 murders. Whereas the Colombian government responded forcefully to FARC activities along these same lines, it often ignored AUC human rights violations and attacks against civilians. Following September 11, 2001, the United States designated the AUC as a Foreign Terrorist Organization.

By the start of peace negotiations between the Colombian government and the FARC in 2012, the AUC had become heavily involved in drug trafficking in order to fund its activities, and attempted to spoil any potential deal. During these negotiations, the FARC used the violence committed by the AUC and other state-aligned militias to push the Colombian government to accept the Special Jurisdiction for Peace, which established tribunals to hear accounts of crimes and abuses without mandating jail time in the majority of cases. This point was the primary reason the Colombian people rejected the peace accord in 2016, and then elected Ivan Duque as president in 2018. In fact, President Duque ran on a platform of dismantling the 2016 accord and has taken active measures to do so since assuming office. This has led to many former FARC rebels rearming, thus risking the tenuous peace. Meanwhile, former members of the AUC are still active in the drug trade, including forty individuals who have been extradited to the United States for drug trafficking. In the end, the Colombian government’s inability and unwillingness to control AUC activities resulted in the AUC pursuing its own goals that were not aligned with the state. Now, the peace that so many Colombians desire is fading away and violence in Colombia continues.

The civil war in Northern Ireland presents another example of the state using a problematic militia group towards short-term objectives, but with long-term consequences. What began as peaceful Catholic civil rights protests in the 1960s devolved into conflict as the Royal Ulster Constabulary, the United Kingdom’s police force in the six counties of Northern Ireland, responded to the protests with violence. By the summer of 1969, the British government sent Army Paratroopers to assist the local police in restoring order and separating the Catholic and Protestant factions. The situation further devolved into open conflict between Protestant Loyalists and Catholic Republicans, who desired union with the Irish Republic, after the killing of thirteen Catholics at the hands of the British Army in the town of Derry, which came to be known as Bloody Sunday. The Irish Republican Army responded, setting off twenty-six bombs in Protestant neighborhoods of Belfast, killing nine and injuring 130 others.