Has President Trump Given Up on Retaking the White House? Follow the Money. 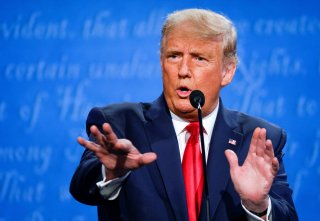 President Donald Trump reportedly has not donated to his own reelection bid even though Democratic nominee Joe Biden’s campaign entered October with nearly three times the amount than the Trump campaign did—$177 million to $63.1 million.

Back in September, Trump said that he would invest his own money into his reelection campaign “if more money is needed,” but still hasn’t done so, according to the New York Times.

The president has apparently cut millions of dollars in television ads broadcasted in battleground states, including nearly $2 million in Michigan and Wisconsin—both states that he narrowly won in 2016—in response to the depleted campaign money supply.

“If I have to, I would, but we’re doing very well,” Trump told reporters in September.

“If we needed any more, I would put it up personally, like I did in the primaries last time,” the president told reporters, referring to his investment in his 2016 presidential campaign. “If I have to, I’ll do it here, but we don’t have to because we have double and maybe even triple what we had a number of years ago, four years ago.”

Although it’s unexpected for an incumbent president to be at a cash disadvantage less than two weeks before Election Day, Trump’s campaign is not broke and it doesn’t owe any lenders money. His $63.1 million entering October—as reported by the Federal Election Commission earlier this month—almost mirrors then-Democratic nominee Hillary Clinton’s from four years ago.

According to the New York Times, senior Trump campaign officials convened Republican National Committee leadership in Washington, DC to cover the campaign’s spending plans for the final days leading up to the election. A source familiar with the matter told the publication that the talks involved potentially requesting a loan or delaying payment on certain expenditures past Election Day to fully fund campaign operations.

Trump’s campaign team noted that the RNC is working to help fund a $55 million advertising push during the final days of the election season in several battleground states.

“Every campaign makes fall ad reservations months in advance and adjusts them as Election Day approaches—including the Biden campaign,” Tim Murtaugh, the Trump campaign’s communications director, told the New York Times, noting that the RNC-led advertising effort was “a 40 percent increase over our initial plans.”

Ken Farnaso, the Trump campaign’s deputy national press secretary, reportedly told The Hill on Thursday that “the Trump campaign has all the resources we need to combat Joe Biden’s Hollywood-funded, elitist campaign in the home stretch of this election.”

“We are confident that the American people can see through Biden’s smokescreen and know that our grassroots mobilization, unmatched enthusiasm, and comprehensive ground game strategy wipes the floor with Biden’s sorry excuse for a campaign,” Farnaso added.