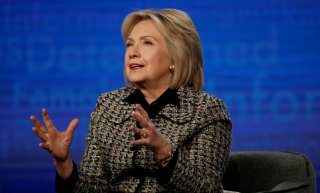 Former Secretary of State Hillary Clinton is set to launch her own podcast with iHeartMedia later this month, titled “You and Me Both with Hillary Clinton.”

Clinton joins a crowd of other politicians who have decided to create their own podcasts including former first lady Michelle Obama, Pete Buttigieg and Sen. Ted Cruz (R-TX). The podcast is scheduled for release on Sept. 29, according to iHeartMedia, which is the same day as the first presidential debate.

"I'm excited to bring these eye-opening, powerful, sometimes hilarious conversations to the forefront and open up new avenues of discussion with some of the people I find most fascinating," Clinton said in a press release. "This podcast is a chance to talk about subjects that are too often overlooked and share the inspiration and education I’ve gotten from my guests.”

The twenty-four-episode podcast will provide an overview and reflection from Clinton’s perspective of the current polarized political spectrum amid the coronavirus pandemic and economic collapse, People magazine reported Tuesday.

"Over the last few years, when people would talk to me about a concern of theirs or a problem that they faced, I found myself saying, 'Well, you and me both!'" Clinton told People. "It became a catchphrase to sum up that a lot of us are worried about the same things and going through the same experiences."

iHeartMedia told CNN Clinton will cover "pressing political issues of our time [and] will tackle the subjects on so many people's minds, including topics like faith, resilience, and grief."

The 2016 presidential candidate recorded the podcast from her home in New York.

The announcement comes less than two months before the presidential election in November, as she’ll be able to use this platform to outwardly reject President Donald Trump’s political agenda and boost Democratic nominee Joe Biden’s election chances. The former first lady has been active on Capitol Hill during her political career, along with the help of her husband former President Bill Clinton, working recently to regain Democratic control in the White House.

Bill Clinton is expected to also launch his own podcast early next year, touching a “wide-range of interests and well-known intellectual curiosity through conversations about the ideas and events that continue to shape his work and our world,” according to Clinton Foundation Communications and Marketing Chief Craig Minassian.