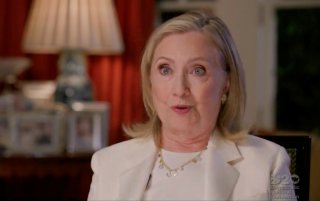 After suffering a brutal defeat during her second run for the commander-in-chief spot, former Democratic nominee Hillary Clinton finally got her long-awaited moment to address the country of President Donald Trump’s shortfalls and blunders as a political leader. The veteran politician was robbed by the Electoral College in 2016, as Clinton grappled the popular vote over Trump but still lost the presidency, in a historic presidential race that reshaped career politics.

“After the last election, I said, ‘We owe Donald Trump an open mind and the chance to lead.’ I really meant it. Every president deserves that,” Clinton said, opening her speech.

“I wish Donald Trump knew how to be a president because America needs a president right now,” she later added.

She couldn’t conceal her bitterness and anger for her failed attempt at convincing Democrats to support her candidacy in 2016, as Clinton’s long record of bad votes and mistakes overpowered her ability to become the first female president. So far, the entire convention has highlighted former Vice President Joe Biden’s empathy, likability and sincerity that he has on both sides of the aisle, and among voters. Clinton couldn’t form that emotional bond with her voter base—a connection Biden has clearly made the case for throughout his presidential run.

Clinton encouraged voters—and even those who didn’t rally behind her four years ago—to support former Vice President Joe Biden’s ticket in November, noting that a second Trump presidency would destroy America’s democracy, and the country’s chaos and tragedy “will get even worse.”

“For four years, people have said to me, ‘I didn’t realize how dangerous he was!’ ‘I wish I could go back and do it over!’ Or worst—‘I should have voted!’” Clinton said. ‘Well, this can’t be another ‘woulda, coulda, shoulda’ election.”

Clinton urged Americans to vote in “overwhelming” numbers as she rang the alarm of Trump’s alleged attempts to block votes and encourage foreign interference to meddle with the upcoming election.

“Joe and Kamala can win three million more votes and still lose. Take it from me. We need numbers so overwhelming Trump can’t sneak or steal his way to victory,” Clinton said.

Dressed in white to celebrate the one hundredth anniversary of the nineteenth amendment, which granted women the right to vote, Clinton was virtually joined by House Speaker Nancy Pelosi (D-Calif.), Sen. Elizabeth Warren (D-Mass.) and finally Sen. Kamala Harris (D-Calif.), who officially accepted the vice-presidential nomination at the end of the night.

The convention honored female leadership, as female performers took to the virtual stage and videos of past and current figures were broadcasted throughout the night. Clinton chimed the progress made so far, specifically referring to Harris’s candidacy and emphasizing the country is “expanding the circle of possibility.” Clinton acted as a link to another historic candidacy—praising the first woman of color on a major party’s ticket.

“I know something about the slings and arrows she’ll face and believe me, this former district attorney and attorney general can handle them all,” Clinton said.

Although Clinton served as a momentous candidate for women, she failed to attract female voters—in addition to black voter support—to back her presidential ticket. Unlike Clinton, Biden has a swarm of female support, which will likely spike after Harris’s candidacy as his running mate.

In just the few minutes Clinton was allotted, she also turned attention towards the importance of the younger generation and attempted to motivate them: Don’t give up on America.

Clinton chose not to run for a third time, as sources close to her noted she believed Biden had the strongest chance of defeating Trump in November. In April, Clinton endorsed Biden and has held two fundraising events for the Demcoratic presidential nominee—and plans to host more, along with the help of her husband, former President Bill Clinton.

“There’s a lot of heartbreak in America right now—and the truth is, many things were broken before the pandemic. But, as the saying goes, the world breaks everyone at one point or another, and afterward, many are stronger in the broken places. Joe Biden knows how to heal because he’s done it himself,” she said, concluding her speech.