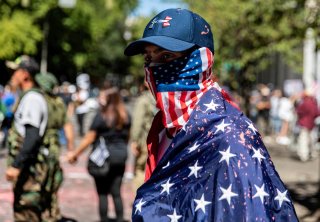 Rep. Jim Banks (R-Ind.) introduced a bill Friday that would force rioters and protesters convicted of violence, looting or vandalism to pay restitution for added “policing activity” needed to control the situation and to be ineligible for coronavirus jobless benefits.

The Support Peaceful Protest Act holds convicted protesters “financially liable for the cost of federal policing,” according to the bill’s legislative text.

“If you’re convicted of a crime that caused more manpower and law enforcement officers to deal with it, then perhaps you should be on the hook to pay for that,” Banks—sponsor of the bill—told WIBC-FM in Indianapolis.

The move comes after an older couple from Banks’s district was tormented by protesters after leaving the Republican National Convention Thursday night, when President Donald Trump gave his nomination acceptance speech from the White House lawn. Banks took to Twitter about the incident, attacking House Speaker Nancy Pelosi to tame the “mobs.”

“Hey @SpeakerPelosi, these are my constituents. They are good people. If you told these mobs to stop, I have a feeling they would,” Banks tweeted.

Banks provided reasoning for the legislation by claiming that violent protesters can tend to the crime since many of them are out of work. The congressman, along with other GOP colleagues, believes the coronavirus unemployment benefits established in the CARES Act offered a disincentive for the unemployed to return to work since the provision gave $600 per week in addition to money received when filing for unemployment.

“Due to enhanced federal benefits, taxpayers are giving wages to jobless rioters that are destroying our communities,” he told KPC News. “We need to cut them off from their funding and make them feel the full financial consequences of their actions.”

Banks did say, however, that he fully supports peaceful protests, since it doesn’t cause harm to other Americans or federal property.

“The people who are acting out in violence are very different from those who are showing up peacefully and it’s easy to see the difference,” he told WIBC.

“What we’re seeing happen in big cities and around the country are angry violent mobs showing up at federal properties, tearing down monuments on federal properties, especially in Washington, DC and it’s got to stop,” he said. “What my bill would do is add new consequences to those individuals who are breaking the law.”

He also noted that the legislation creates “accountability for some of these angry mob protests that are occurring around our country.”

Protests have grown violent in recent months after the killing of George Floyd in May while he was under police custody. Most recently, the life-threatening injuries sustained by Jacob Blake, who was shot in the back seven times by a police officer in Wisconsin, has erupted another wave of civil unrest, as rioters have taken to the streets violently and forcefully to change the systemic racism in the policing system.