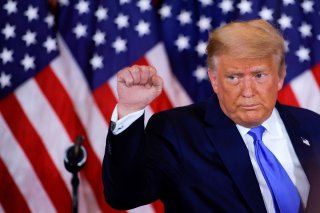 In a panic-stricken night of see-sawing leads between President Donald Trump and Democratic nominee Joe Biden in critical battleground states, Democrats perhaps took the biggest blow of the night when the president sailed to victory in Florida.

While the polls fizzled hope into Biden’s campaign and its supporters as the former vice president garnered consistent margins among voters in the Sunshine State, it still backed Trump’s re-election.

With 96 percent of the estimated vote total, Trump rallied 51.2 percent of Floridian voter support, while Biden trailed behind at 47.8 percent. Despite the results being a major defeat for Democrats, it’s not necessarily a surprise as Trump flipped the state red when he won against then-Democratic nominee Hillary Clinton—although it was by an even smaller margin—just 1.2 percent.

But experts have pointed to one region in southern Florida that Biden clearly underperformed in compared to Clinton in 2016—Miami-Dade County—results that could have jeopardized the former vice president’s success in the state.

“It looks like Biden still carried Miami-Dade County, but by less than the campaign had expected, so people are pointing to a shift away from the Democrats, or perhaps a higher turnout among Republicans is probably a better way to put it . . . particularly among some Latino voters, including Cuban-Americans and also some of the newer immigrant groups including Venezuelan, Colombian, Nicaraguan immigrant voters in Miami-Dade. The question then is why, why did this happen,” Michael Jones-Correa, professor of political science and director of the Center for the Study of Ethnicity, Race and Immigration at the University of Pennsylvania, said.

“I would attribute this largely to a persistent, consistent investment by Republicans and by the Trump campaign in South Florida dating back to at least 2016 and continuing over the last four years in a way that the Democrats haven’t matched,” Jones-Correa added.

According to election results published by the New York Times, Biden rallied 53.3 percent of support in Miami-Dade County, while Trump had 46 percent. In 2016, however, the same county soaked in an overwhelmingly blue wave, as Clinton held 63.2 percent of support, with Trump struggling behind at 33.8 percent. Clinton carried more than a 30 percent margin in the county, but Biden garnered a less than eight percent lead over the president.

The unexpected results likely paved a smooth path for Trump to win the state’s twenty-nine electoral votes in the race for the White House.

But the president’s success in Miami-Dade—the most populous county in the state—could be attributed to his efforts to gain Latino voters, particularly from Cuban-Americans, in the region.

Nearly 55 percent of Florida’s Cuban-American vote backed Trump this year’s election, as well as 30 percent of the Puerto Rican vote and 48 percent of “other Latinos,” according to NBC News exit polls.

The Trump campaign spent months fueling information about Biden’s presidential candidacy into Florida, dubbing him as a socialist and even a “Castro-Chavista,” referring to Fidel Castro of Cuba and Hugo Chavez of Venezuela, igniting fears from Latinos from boiled socialist regimes.

“First-generation Cuban arrivals since 2000, they’re actually considerably more conservative, and I think that Cuban voters—again, Nicaraguan, Venezuelan, some of the Colombian, recent immigrants—are more conservative and the language of Democrats as radicals or as socialists may resonate,” Jones-Correa said.

Trump also pumped money into building campaign infrastructure within the county and overall state, with Spanish-language ads and translated websites, a move that was also practiced by GOP candidates in the 2018 midterm elections that illuminated “weaknesses in the Democratic party’s outreach to Latino voters,” according to the University of Pennsylvania professor, as Democrats didn’t do the same.

Rep. Alexandria Ocasio-Cortez (D-N.Y.) took to Twitter about the disparities in Democrats gaining Latino support, saying “I will say we’ve been sounding the alarm about Dem vulnerabilities w/ Latinos for a long, long time.”

But it wasn’t just the Latino voters that handed Trump a Florida win, it was also his successful performance among Black, senior populations and college-educated whites.

Image: U.S. President Donald Trump raises his fist as he reacts to early results from the 2020 U.S. presidential election in the East Room of the White House in Washington, U.S., November 4, 2020. REUTERS/Carlos Barria.