How Many Republicans Are Speaking at the Democratic National Convention? 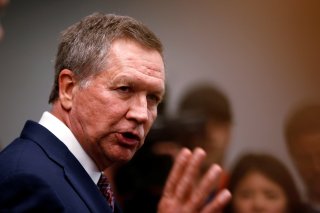 The Democratic National Convention kicks off Monday night, with leaders from both sides of the aisle giving speeches in support of presumptive Democratic nominee Joe Biden.

One main speaker -- former Ohio Gov. John Kasich (R), who is a big voice in the “Never Trump” movement, decided to talk at the convention as President Donald Trump has become a “divider” in office during his term, Kasich told CNN. The former governor ran for the GOP nomination in 2016 against Trump, but didn’t attract enough support from voters towards his campaign.

Kasich’s message will likely be about uniting America and advocating for a more functioning federal government.

Although most progressives will disagree with Kasich being a speaker, his support crossing party lines will likely encourage some independents, and even Republicans, to back Biden in the upcoming election.

Kasich isn’t the only Republican giving a speech on the first night of the convention, as former New Jersey Gov. Christine Whitman, former Rep. Susan Molinari (R-N.Y.) and former CEO of Hewlett Packard Meg Whitman -- who ran for governor in California in 2010 -- will also speak.

Historically, it isn’t uncommon for political leaders from both sides of the aisle to attend and speak at a major party’s convention. In 2012, Rep. Charlie Crist (D-Fla.) -- a former Republican governor of Florida -- supported former President Barack Obama’s reelection bid at the party’s convention. In 2008, then-Connecticut Sen. Joe Lieberman and a former member of the Democratic party as he served as the party's vice presidential nominee in the 2000 general election, spoke at the Republican National Convention of John McCain.

While Biden attempts to rally support with convention speakers and events, Trump has planned appearances in a number of battleground states this week, including Pennsylvania, Minnesota, Wisconsin and Arizona.