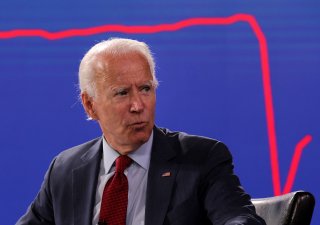 If you go to Joe Biden’s Vision for America’s Future, you will get a one-line vision and then the biggest Christmas tree in Democratic politics. The one-line vision reads, “We aren’t just going to rebuild what has worked in the past. This is our opportunity to build back better than ever.” Next, Biden’s campaign follows a long tradition, beginning with the acceptance speech of Fritz Mondale when he was nominated to be the next president in 1984, if not earlier. The tradition calls on Democratic nominees to promise something to every conceivable constituency, preferably something material, like free tuition for students, free childcare for working parents, and so on and on. Biden’s list runs to, believe it or not, forty-five goodies.

A voter who hails from any one of these groups—which includes most everybody—will note that rich promises are made to another forty-four groups, and cannot help but ask “really?” Biden will take over the White House, if he is elected, in a perfect storm: a combination of a raging pandemic and a shuttered economy. Moreover, he will need to get much of his agenda through Congress, which, even if it is controlled by Democrats, historically has been slow to act and has had its own agenda. At best, such a voter will take Biden’s political Christmas promises as a sign that his heart is in the right place, that he has good intentions. I fear, however, many will take it as politics as usual.

The Washington Post’s E.J. Dionne Jr. comes to the rescue and suggests an overarching “galvanizing idea.” It is a vision that is said to appeal both to the progressive left and to the centrist Democrats. The key concept is not to bring America back, but “dignity.” To quote Dionne: “A politics of dignity …begin[s] to close the deep social divides that have distorted our politics and torn our country asunder. Opening the way to a new spirit of solidarity requires something else as well: An honest reckoning with the urgency of overcoming the injuries of race and gender but also with those of class.”

There are two very different ways to understand this appealing conception. One cited by Joseph O’Neill, a professor at Bard College, who writes: “Dignity refers to the enlightened idea that all persons are inherently valuable and worthy of respect. Article 1 of the Universal Declaration of Human Rights states that all human beings are born free and equal in dignity and rights.” It implies that all people deserve respect will speak to African Americans, Latinos, and LGBTQ people, all of whom are often hassled by police without any reason—and to White Americans without a college education who feel snubbed by the coastal liberal elites. It suggests that a future president would promise to provide people with medical information and then let them make their own choices, whether it is having an abortion or wearing a mask, unless science indicates that they directly endanger others. It means that civil servants, from the DMV to the IRS, will deal with citizens as their cherished customers and not as people who crowd their days and interrupt their paperwork. It means that everyone will be given a chance to be heard before public policies are made or remade, everyone will have a secured chance to vote.

Dignity can be understood to mean that everyone is entitled to basics, without which a person cannot lead a dignified life. These include access to health care; work that pays a living wage; a federal guarantee for a job if they cannot find one in the private sector; basic income if they cannot work; and a roof over their head. People may differ re what is basic; this is a subject politics should focus on rather than on the list we like to have and we all know is out of reach, in the foreseeable future. One way to proceed is the way we reformulate budgets: for every item you want to add to the wish list, you have to take one off. This is essential because under the current circumstances, even the basic list as constituted is a very tall order.

The idea of dignity will lose a lot of its appeal if one tries to pack into it everything that people aspire to and are entitled to. Thus, when Dionne adds that dignity entails “overcoming the injuries of race and gender […and…] class” and O’Neill states that “dignity synthesizes issues of justice and recognition, tax and economic policy, family values, environmental policy, even statehood for the District of Columbia,” they expand the idea to the point where it loses much of its compelling power. No one can question that inequity is unjust and injurious; no one should question that racism must be eliminated. But nobody should be promised that these structural changes can be brought about in the next four years. Focusing on basics first takes nothing away from the importance, legitimacy, and even urgency of all the other items on the grand progressive agenda. Providing for the basics is, in effect, a major down payment on this more demanding agenda.

A dignity agenda suggests a two-pronged future, one in which we first focus on getting everyone the basics required to lead a dignified life, then turn to all the other items people are entitled to. Such a basics-centered campaign will be much more credible than one that promises everything to everyone. Public opinion polls show that the public has very little trust in politicians, Congress, and the government. One key reason for this lack of trust is that politicians compete in terms of who can promise more, and then deliver rather little. A campaign that focuses on restoring dignity, on treating all people, of all backgrounds, with respect, and that promises, for now, to provide them with the basics needed for a dignified life, can do more than win the day for the candidate. It can start the process of restoring trust in our elected officials.

Someone on Biden’s staff had the startling insight that Trump got a lot of mileage by appealing to the nostalgic voters, to those who believe America was great and that he can make it so again. The Biden campaign, keen to appeal to the same voters, cannot refer to bringing America back, because whatever period in the past it chooses to highlight, a whole array of Democratic constituencies will find it woefully deficient. The campaign is trying to square this circle by sticking the word “back” on agenda items concerning the future: “Build Back Better: Jobs and Economic Recovery for Working Families,” “Build Back Better: Racial Equity Across the American Economy,”  and the prize-winning “Build Back Better: 21st Century Caregiving and Education Workforce,” and “Build Back Better: Sustainable Infrastructure and a Clean Energy Future.” It is like putting a saddle on a cow.

To be fair, those who scroll past this awkward rhetoric will be rewarded with some true campaign poetry: “An idea that goes back to our founding principle that all men are created equal. It’s an idea that’s stronger than any army, bigger than any ocean, more powerful than any dictator. It gives hope to the most desperate people on Earth. It instills in every single person in this country the belief that no matter where they start in life, there’s nothing they can’t achieve if they work at it.”

“We’re in a battle for the soul of America. It’s time to remember who we are. We’re Americans: tough, resilient, but always full of hope. It’s time to treat each other with dignity.” These are ideals all Americans can line up to vote for.