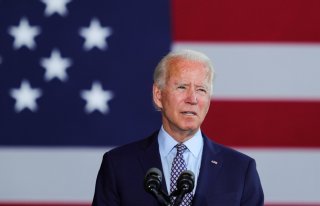 Presumptive Democratic presidential nominee Joe Biden unveiled his economic agenda on Thursday centered around a “Buy American” proposal that would invest $700 billion federal dollars into manufacturing materials and other resources made in the United States, a move the campaign said would be the most significant investment in America since the second world war.

Speaking on Friday to reporters at the White House, President Donald Trump complained, “He plagiarized from me, but he could never pull it off. He likes plagiarizing. It's a plan that is very radical left. But he said the right things because he's copying what I've done, but the difference is he can't do it.” Politically, it was a clever move of Biden to try and outflank Trump. His plan was devised with substantial input from Elizabeth Warren and will shore up support among progressives. Former Trump adviser Steve Bannon has also praised Biden for putting forth the proposal. But in stealing a leaf from Trump, Biden is raising a question he may not be fully prepared to answer: just how effective will his ballyhooed plan actually be?

Proposals for an American industrial policy have regularly surfaced over the decades, whether it was former Rep. Dick Gephardt on the Left or H. Ross Perot on the Right. They always had one thing in common: they never went anywhere. Trump came closest but ended up focusing on traditional Republican tax cuts and never proposed a serious infrastructure plan. His own administration has been riven by a fight between a faction led by Peter Navarro, who is a protectionist, and by Treasury Secretary Steven Mnuchin, who is a free-market and free-trade advocate.

Now Biden appears to be following in the footsteps of the protectionists. His proposal is “disappointing,” according to several scholars at the American Enterprise Institute (AEI) since it includes “misguided” economic policies that are similar to Trump’s “America First” agenda. “I just see this as rather predictable, very much a political speech,” says Desmond Lachman, resident fellow at AEI and former managing director and economic strategist at Salomon Smith Barney. “He’s really just saying, effectively, ‘I can do the same thing as Trump does.’ Meanwhile, he’s arguing that Trump hasn’t done enough to get the jobs back.” It’s also the case that Biden’s plan to raise a variety of taxes, including the corporate tax rate, could put a real dent in the stock market.

The Biden agenda—titled “Build Back Better”—calls for $400 billion in manufacturing sectors like clean energy, infrastructure and the workforce, and $300 billion on technological research and development such as artificial intelligence. Biden didn’t provide specific details as to how he will fund these plans, but emphasized the need for more domestic production and a shift from foreign dependence on goods. Biden also said he will create 5 million jobs and seeks to raise the minimum wage to $15 per hour.

Trump’s “America First” agenda also echoes the need for more US-made goods, specifically medical equipment and technologies, so that the country is better equipped to handle another economic or health crisis similar to the coronavirus. Lachman said embracing protectionist ideas and blocking national trade would only add more to the growing national deficit.

Despite the potential economic problems with Biden’s proposal, Stan Veuger, a resident scholar at AEI, said the allocations to research and development is a “reasonably good idea.” “It looks like a significant chunk of the money will, in fact, go to the science side of things, though I worry about spreading research and development out evenly across the country as opposed to awarding it to the highest-productivity research teams,” Veuger said.

Democrats are rallying around the plan. Former presidential candidate Beto O’Rourke declared to reporters on Friday, “The president traffics in lies and fear. He’s trying to scare people. They’ll use phrases like 'far left' or 'socialism' to describe anything that the vice president does, no matter how far it is from socialism." Biden himself said the proposal would provide a path to recovery after the coronavirus pandemic and after President Donald Trump’s failure to lead and aid the country. "Throughout this crisis, Donald Trump has been almost singularly focused on the stock market - the Dow and the Nasdaq. Not you and not your families," Biden said. "If I am fortunate enough to be your president, I'll be laser-focused on working families, middle-class families like I came from here in Scranton, not the wealthy investor class. They don't need me. Working families do." He referred to Trump as "the exact wrong person to lead at this moment. He will not bring this country together. He's determined to drive us apart and keep his base in place."

Lachman said it’ll be “difficult for Trump” to bounce back with economic arguments since he can’t change his mind on policies from his “America First” agenda. Instead, he suggests Trump will publicly “question Biden’s credibility.” Biden announced his agenda just four months before the upcoming presidential elections. He and Trump will play political football over whose economic plans will shuttle the United States out of the coronavirus crisis. Trump has yet to offer a plan as his own administration remains riven with disputes over where it should head economically. Biden’s “Buy American” proposal focuses on clean vehicles and energy, improvements in infrastructure, and restoring the nation’s stockpile, which mirrors some of former rival Elizabeth Warren’s (D-MA) economic policies. Warren, however, was more focused on boosting clean energy. “Let’s use this opportunity to make bold investments in American industry and innovation so the future is made in America - and in all of America,” Biden tweeted on Friday. By contrast, the Trump campaign itself appeared to be lower on energy than ever, canceling a rally that it had planned for Saturday in Portsmouth, New Hampshire on the pretext that Tropical Storm Fay might wash it out.