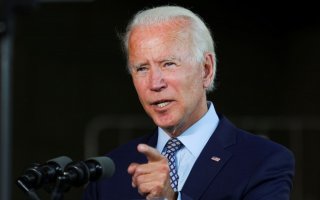 The national poll released Wednesday revealed that registered voters back Biden at 52% and Trump at 37%. Biden’s lead is nearly double what it was last month.

“Yes, there’s still 16 weeks until Election Day, but this is a very unpleasant real time look at what the future could be for President Trump. There is no upside, no silver lining, no encouraging trend hidden somewhere in this survey for the president,” Tim Malley, a Quinnipiac University polling analyst, said.

Voters also gave Biden a five-point lead in terms of who would handle the economy better at 50%, with Trump trailing behind at 45%. Just last month, Trump was ahead at 51% and Biden at 46%.

Trump’s approval rating on handling the economy, which has been the president’s strongest issue while in office, tanked, stands at 44% and Biden’s at 42%. The president’s net economic score is the lowest it’s been since August 2017.

Biden’s jump in the poll is partially due to an overwhelming amount of independent voters, according to Quinnipiac University. Last month, the group was divided between the two candidates, but now Biden holds a seventeen-point independent voter lead over Trump.

The results of the poll come as the presidential elections are less than four months away. Recent polls have shown Trump to be underwater, especially because of his coronavirus response and handling of the economic crisis.

Voters were surveyed nationwide from July 9 to 13, with 1,273 participants and a margin of error of plus or minus 2.8 percentage points.