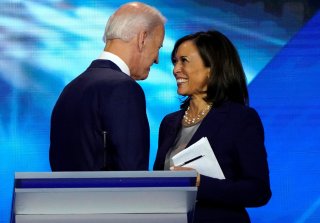 The one element of surprise that Joe Biden has is his pick for vice-president. He’s likely to string it out as long as possible for maximum effect.

Biden’s self-proclaimed due date to pick his vice-presidential candidate is now 20 days away - Aug. 1. The moment he does announce it, President Donald Trump will train the political guns of August on Biden’s nominee.

“One of the things that Joe Biden has done is said that he’s definitely going to pick a woman. There are a number of choices out there that would generate more enthusiasm among his Democratic base. Enthusiasm doesn’t necessarily make anybody who’s unlikely to vote for him, vote for him,” Murray said. “It would ensure some Democrats who didn’t support him to begin with, that he has their interests at heart and their interests are going to be part of his administration.”

With the elections just four months away, Biden must pick a “solid choice to step into the role of government,” Murray said, especially for swing voters.

Regardless of whom Biden selects as his running mate, Murray said the decision can’t swing an entire election or make him win a key state.

“Historically, the idea has been that you need to pick a vice president to balance the ticket in some way, shape or form, either by experience or ideology,” Murray said.

Based off of the Monmouth University Poll and other polls conducted in June, these are Biden’s top VP picks.

Duckworth - an Iraqi War veteran who lost both legs while in combat - is the only contender with military experience.

The war veteran is an Asian American, and 45 percent of panel participants in the Monmouth poll say they’d support an Asian woman on the ticket.

The senator came into the national spotlight this week after Fox News host, Tucker Carlson, criticized her for considering removing statues of George Washington. Duckworth quickly responded to Carlson via Twitter, “Does @TuckerCarlson want to walk a mile in my legs and then tell me whether or not I love America?”

Demings - a black woman and former chief of police in Orlando - served as an impeachment manager during President Donald Trump’s impeachment trial. She compared the trial to “police work” and has a strong background in law enforcement, serving as an appeal to voters who fear the “defund the police” movement.

As a non-presidential candidate, Demings received seven percent of support to be Biden’s VP in the Monmouth poll.

Warren - a more progressive candidate - has also led as a potential VP. Despite her not being a woman of color, 13 percent of panel participants in the Monmouth poll, 30 percent of participants in a Yahoo News/YouGov poll and 27 percent in a USA Today and Suffolk University poll support her as a pick.

Warren and Biden agree on issues such as education - reducing student debt and providing some free college - climate change and gun control but disagree on Medicare for All.

Bottoms - an African American and Atlanta’s mayor - has gained political momentum in recent weeks because of her handling of the coronavirus and protests after the killing of George Floyd. Bottoms implemented a mask mandate in Atlanta, despite Republican Gov. Brian Kemp’s refusal to issue a statewide order.

At the beginning of 2020 when Biden’s approval ratings were slipping, Bottoms was loyal to the former VP.

"He is a strong candidate and there have been some bumps along the way, but I think that's to be expected. Nobody ever said it would be easy," Bottoms told 11Alive News in late 2019. "When you look at the legacy that the Obama-Biden administration has in Georgia, people remember that and especially when you look at large groups of people of color as a demographic in our state then, by and large, especially our seasoned African American voters, are solidly behind Joe Biden."

About 63 percent of voters say they would be “very satisfied” if Biden picked a black woman to be his VP, according to the Monmouth poll.

“If he doesn’t pick a woman of color, there will be parts of his base that will be disappointed,” Murray said.

Harris - a black and Indian American woman - was one of Biden’s early rivals for the Democratic presidential nomination and was a former district attorney and state attorney general.

Harris is a leading pick as Biden’s running mate in the Monmouth Poll, with 28 percent saying they’d prefer her. She also led in the USA Today and Suffolk University poll with 36 percent of participants saying they’d support her candidacy.

The two have similar economic views - raising the federal minimum wage to $15 per hour and reducing the cost of education, but differ when it comes to legalizing marijuana and abortion rights. Harris supports the legalization of the drug and barely any limitations to getting an abortion, whereas Biden thinks the state should decide if marijuana should be legalized and there should be abortion limitations. But for Harris to get the nod, she will have to overcome her “Jill Biden problem,” a Democratic staffer in the Senate observes. She has not forgotten Harris’ swipes at her husband during the Democratic debates.