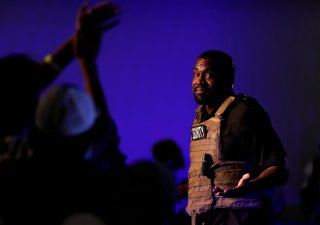 Kanye West’s unusual campaign and long-shot presidential run might have an impact in some battleground states, as Republican operatives have been helping the rapper get on ballots across the country.

West, running as a member of the “Birthday Party,” has held just one controversial campaign event for his presidency in South Carolina, where he wore a bullet-proof vest and talked about abortion issues and his family. The event launched concerns about West’s mental health, as his wife, Kim Kardashian, blamed his bipolar disorder for his behavior. West has publicly stated he doesn’t take medication for the illness.

West’s third-party candidacy could have an impact in a tight race, especially since he has national name recognition.

Since he announced his run for the presidency earlier in the summer, West has officially gotten on the ballot in twelve states, including highly-monitored swing states of Colorado, Iowa and Minnesota. Both Colorado and Minnesota voted for former Secretary of State Hillary Clinton in 2016, but Clinton won narrowly by just five points in Colorado and less than two points in Minnesota.

West’s name will also be on the ballot—thanks to Republicans who have been actively working with West’s campaign—in Tennessee, Mississippi, Kentucky, Oklahoma, Arkansas, Louisiana, Utah and Idaho, all predominantly Republican states, as well as Vermont. Considering those twelve states, it’s impossible for West to land the Oval Office in November, as the deadline to request to be on any more states’ ballots was Friday.

The rapper has a number of pending lawsuits in the works in Wisconsin, Ohio and West Virginia, as all three denied his file to be on the ballot, prompting him to sue. Lawsuits, however, have been unfavorable towards West’s campaign when he received word from two other cases, ruling against West in Virginia and in Arizona.

Politicians on both sides of the aisle have questioned his intentions for running, with some suggesting that his candidacy serves to distract voters to back Democratic nominee Joe Biden. West, who formerly supported President Donald Trump, didn’t vote for the president in 2016 but noted that he “would have voted for Trump” if he did. West is a registered Republican and has received substantial help during his presidential run from GOP officials who have connections to the current Trump administration.

In an interview with Forbes last month, when asked if he was a spoiler candidate for the upcoming election, West said, “I’m not going to argue with you.”

West also has a strong relationship with the president’s son-in-law and senior adviser, Jared Kushner, whom the rapper met with recently, but Kushner publicly insisted they didn’t speak about his campaign, as the two have been friends for nearly a decade.

Other politicians have rumored that Republicans are actually paying West to run for president, an issue that was discussed on Nick Cannon’s podcast called, Cannon’s Class podcast. When asked about the alleged report, West responded, “Bro, can't nobody pay me. I got more money than Trump.”

Known to be a musical and lyrical icon, West has spent more than $6.7 million towards his own campaign, according to his first financial report submitted to the Federal Election Commission late Friday afternoon. West has only raised about $11,500 in donations from mid-July through late August, spending nearly $5.9 million during the same time period.