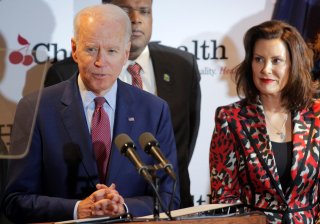 Crises make or break leaders. Officeholders, perhaps previously overlooked, are unexpectedly thrust into the spotlight and forced by circumstance to perform. As the coronavirus pandemic continues to encapsulate the United States, multiple governors have been obligated to step up and control the public health crises that have overtaken their states. The most prominent example of this is New York Governor Andrew Cuomo, who is gaining a growing fan movement who prefer him over presumptive Democratic presidential nominee Joe Biden.

But behind Cuomo, with a decade less experience in the governor’s chair and substantially less name recognition, is Gretchen Whitmer, the Governor of Michigan. In office only a year, Whitmer’s state now has the fourth most coronavirus cases in the United States, and the third most deaths.

To get a grip on the situation, last week the Whitmer issued the strictest stay-at-home order in the country. Whitmer has banned gatherings of any size, has forbidden people from traveling from one residence to another and has made big box stores close down certain aisles. Customers are not permitted to purchase non-essential goods such as “carpeting, flooring, furniture, garden centers, plant nurseries, or paint.” Civil liberties activists are calling her restrictions authoritarian in nature.

The forty-eight-year-old is the daughter of an influential Michigan business leader and a former assistant state attorney general. She discovered a love for politics while in college and was elected to office for the first time in 2000 at the age of twenty-nine.

While in the legislature, Whitmer earned a reputation as a wheeler and dealer, able to make powerful friends and broker bipartisan deals. She’s always considered herself a moderate Democrat that focuses more on achieving workable legislation than on progressive purity.

In 2006 she made the jump to the state senate, and in 2011 became the senate minority leader (Republicans controlled the state legislature during her entire tenure). In 2013, while still in the state senate, Whitmer made national news during an abortion bill debate where she publicly discussed her personal experience with sexual assault. She temporarily retired from politics in 2014.

Having deferred gubernatorial runs in 2010 and 2014, Whitmer reentered politics and announced her candidacy in 2018, and won the statehouse with a 10% margin. Her first year in office was one of difficulty. She had campaigned on an infrastructure platform that failed to pass through the Republican-controlled house and senate, and a gas tax she proposed was rejected by both Republicans and Democrats.

The coronavirus pandemic has presented both tragedy and opportunity for Whitmer. Her leadership, including a national spat initiated by President Donald Trump, has raised her profile and put her on the map as a possible running mate for Joe Biden in the fall.

The governor has denied considering the position as long as her state is in crisis, but she remains high on the shortlist and would be a strong addition to the Democratic ticket.