A Method in the Madness? Donald Trump Restores ‘Interests’ to the Center of U.S. Foreign Policy 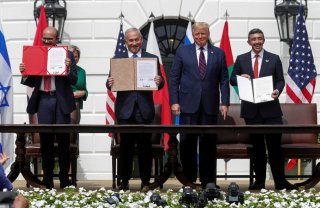 The retirement of Prime Minister Shinzo Abe in Japan provides an interesting moment to reflect on the overall foreign policy approach of Donald Trump. This is not simply because Trump is coincidentally coming to the end of his first term of office, but also because Abe was the first international figure of any substance to pay Trump a visit after his shock election victory in 2016, referring to him subsequently as a “reliable leader.”

It’s no secret that almost the entire Republican foreign policy establishment abandoned Trump on his election, or indeed, long before. Some still argue that he is neither remotely interested in foreign policy nor suited for office, and doesn’t have the intellectual curiosity or the concentration to take it seriously. Others have long argued that Trump could make sense as a kind of madman after the example of Richard Nixon, though once again, the foreign policy establishment have taken time and effort to dismiss not only the theory (as it is entirely contrary to their highly professionalized approach) but also the idea that Trump is in any way suited to the role. Nixon? Maybe. Trump? No way.

All of these criticisms are premised on what I believe is the biggest single mistake Trump’s critics make which is to focus almost entirely on his character, ignoring what’s actually going on. Hence, they regarded Abe’s Tiggerish skitter into the golden elevator at Trump Tower in November 2016 as heralding a strategy of “calculated pampering” of the capricious president-elect. In fact, Trump has had a significant impact on U.S. foreign policy since his election, but because he has a radically different conception of U.S. interests to those that echo around the exclusive and well-constructed chambers of the U.S. foreign policy club, his critics only hear the discordant notes and don't observe the pattern.

An Archimedean point is usually taken to mean a point outside of a system from which an observer may gain a neutral or objective view of the operation of the whole. This, in many ways, reflects the long-term aspiration of the U.S. foreign policy set: to establish and defend a disinterested sphere in which to navigate international disputes while recognising the different interests at stake. The United States, in this account, regards itself as the proxy referee, committed to principles and institutions, always ready to mediate between parties; on the side of the good because on the side of the just outcome, with a vast body or career diplomats and foreign policy specialists to draw upon to determine what that just outcome might be. A typical example is the South China Sea, where the United States traditionally claims to have no particular interests at stake save to protect the “freedom of navigation” and to support its allies in an effort to mediate their legitimate disputes over sovereignty. To this end, the United States is explicit in claiming to take no particular side.

This general position has developed in the aftermath of the Cold War, during which Washington clearly had a “side” in the sense that it opposed both Communism and communist powers, and was prepared to ally with some pretty dreadful regimes in support of its broader aim of a liberal capitalist world order. The Iraq war in 1990–91 marked the turning point and saw the United States go to war in defense—not of Kuwait, but of “sovereignty,” an important difference which meant they left Saddam Hussein in power. Several failed humanitarian wars later, the September 11 attacks saw America go to war, not against Afghanistan (despite its forces still being in Afghanistan nearly twenty years later) but against “terrorism,” which like “sovereignty” is an unqualified category of something else. Since the end of the Cold War, therefore, the United States has grown habitually averse to taking sides, identifying its interests alongside that of a stable world order and against any generalized threats thereto, not favoring any particular side that might comprise it.

In search, therefore, of an Archimedean point of indifference, where the United States would forswear the prioritization of its own particular interests, Washington neglected the entire reason why Archimedes sought such a point; to establish a position from which to exert leverage and move the whole Earth.

Donald Trump is no stranger to taking sides. Indeed, the horror exhibited at his election by the U.S. foreign policy elite, whose job is literally to protect and project American interests, was precisely because he said that is what they were going to do. Never has cognitive dissonance been so purely expressed than with the seismic shudder detected at Foggy Bottom during Donald Trump’s inaugural address. And it continues in the constant references to the “failure” of his foreign policy initiatives in almost all the hallmark journals. But there are also more favourable accounts and a lively debate underscored by both enthusiasm and scorn.

In my view, Trump has been remarkably successful, perhaps even in spite of himself, for the simple reason that in clearly expressing U.S. interests in terms of the advantages that accrue to the United States and its citizens he has made the United States a more predictable power. This has given other states a clear reason to strengthen their own relationship with the United States, or “bandwagon,” as it’s sometimes known, or find themselves frozen out. In other words, no more free riding and no more overreach. And despite the exasperation of the bow-tie brigade, bandwagoning is exactly what many states are now doing.

The three regions where this is most clearly apparent are in Europe, the Middle East, and East Asia. Ironically, when Donald Trump was first elected, it became commonplace to simply declare that German Chancellor Angela Merkel was now the de facto leader of the free world, usually accompanied by a photograph of her communing with her soulmate, President Barack Obama, just to drive the point home. Nevertheless, the obvious froideur that exists between Trump and Merkel and the latter’s refusal to take U.S. demands of an increase in military expenditure seriously have left Germany looking increasingly isolated even in the EU.

Now Trump is slowly resolving long-standing concerns about German commitments to collective defense by rebasing U.S. troops out of Germany. At the same time, German reluctance to abandon plans to build Nord Stream II, and lack of any serious moves against China (except for a creditable diplomatic effort to rebut Chinese pressure on the EU in recent days), due to a desire to maintain commercial links, have ensured that no one in the “free world” is looking to Germany for leadership these days. Last week, Serbia and Kosovo signed an agreement committing to economic normalization between the two states—Germany was not even involved.

In the Middle East, the recent peace agreement between Israel and the United Arab Emirates is possibly the most significant diplomatic achievement in the region in the last twenty years. The fact that it may be followed by similar agreements with several other states only reinforces the impression of a major breakthrough. Many other developments in the region are debatable in terms of their long term significance, but the idea that Trump has a record of failure looks increasingly ridiculous with every day that passes, even if you disagree with elements of it.

In East Asia, the entire calculus of U.S. interests has changed. From a policy of constant accommodation towards China, the scales have tipped radically towards a new strategic dispensation. Even the language has changed, from Asia Pacific to the new Indo-Pacific region. New alliances are emerging, from a U.S. Vietnamese courtship, to a firm and growing bilateral relationship between India and Japan. The most interesting thing about this developing ecosystem of diplomatic and economic relationships is that although the U.S. is heavily involved, it has its own momentum. Indeed, Scott Morrison, Narendra Modi, and Joko Widodo are all in their own way maneuvering within the broad wake of a profound U.S. reorientation; one which makes Obama’s “pivot to Asia” seem utterly inconsequential.

An important part in these shifting alignments was played, of course, by Shinzo Abe, who had the foresight to see that flying to Washington to welcome Donald Trump to the presidency might just present significant opportunities for Japan and amount to more than just “calculated pampering.” Nevertheless, it is the clearer articulation of U.S. interests that has been key to the whole effort. This has involved the United States taking sides once again, instead of trying always to be the disinterested referee of the liberal world order. It has seen the United States become more conditional, not less, and has obliged other states to choose sides rather than hedge their bets. Japan was the first to do so, followed by Australia and recently much of Southeast Asia who are becoming more confident in challenging Chinese encroachments. India’s relationship with the United States is rapidly developing, leaving only South Korea and the Philippines feeling the pressure.

In Europe, NATO has had to address long-overdue questions concerning its purpose in a post-Cold War world, and been confronted by an ally long taken for granted expecting them to stand up for themselves. European powers have responded by progressively shutting Huawei out of their telecoms infrastructure, increasing defense expenditure, and are now beginning to speak up about Hong Kong and other matters. There are some outstanding issues, but the direction is clear enough. Lastly, the Middle East was a train-wreck when Trump came into power, with the United States in retreat and a triumphalist Iran calling the shots from Baghdad to Beirut. Now Iran has faced reverses and defeats, and has latterly gone begging to China, while Trump has brokered the most significant peace deal in decades, with more to come.