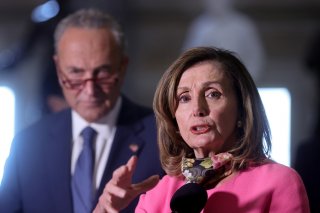 Treasury Secretary Steven Mnuchin said Wednesday that another coronavirus relief package “would be difficult” to pass before Nov. 3, despite months of back-and-forth talks between both sides of the aisle and a swamped economy.

“I’d say at this point getting something done before the election and executing on that would be difficult, just given where we are,” he said at the Milken Institute’s Global Conference.

Mnuchin and top White House aides have been negotiating with House Speaker Nancy Pelosi (D-Calif.) for months, with the most recent GOP-offer being a $1.8 trillion package that embraced some of the Democratic provisions outlined in their $2.2 trillion bill passed by the House of Representatives last month. But Pelosi, top Democrats and even Senate Republicans rejected the proposal.

“I think that definitely is part of the reality. That’s definitely an issue,” Mnuchin said, referring to Democrats resisting to strike a deal.

Mnuchin’s comments come after he and Pelosi had an hour-long conversation Wednesday morning, a meeting that the Speaker’s spokesman dubbed as “productive.”

“The Speaker believes we must reopen our economy & schools safely & soon, & scientists agree we must have a strategic testing plan,” Pelosi spokesman Drew Hammill said in a tweet as the two remain divided on language regarding a national coronavirus testing plan.

Mnuchin and Pelosi also disagree on key provisions that are expected to be included in the next economic relief package like funding for state and local governments and unemployment benefits. Democrats are forcefully arguing against a liability shield that would protect businesses, schools and hospitals from coronavirus-related incidents.

The treasury secretary also blasted Pelosi’s persistence in forming a full-scale deal that addresses all of the nation’s drowning issues, instead of passing specific legislation for sectors that need it the most, like the airline industry.

“I don’t agree with the speaker’s approach of ‘we have to do all or nothing.’ We’re continuing to negotiate a comprehensive bill but we want to put money into the economy now,” Mnuchin said.

The two did talk about airline-specific legislation since thousands of people within that sector are being furloughed, but Pelosi stopped negotiations after receiving backlash from Democratic colleagues over-focusing on just one industry, rather than all of them.

Even though Mnuchin and Pelosi are polarized on a number of key issues that made negotiations hit a brick wall, the country can expect to see another round of stimulus checks, since that’s one of the main provisions they have come to an agreement on.

After calling off negotiations, Trump later urged top White House aides to “go big or go home” in a tweet on Wednesday, pumping confusion over whether the country will receive economic relief. But the president has recently pushed for Congress to strike a deal, with his top economic adviser Larry Kudlow even suggesting that Mnuchin could surpass Democratic pandemic spending, which was originally priced at $3.4 trillion.

But the president may have difficulty in passing a $3 trillion legislation as Senate Republicans blocked Senate Majority Leader Mitch McConnell’s (R-Ky.) attempt at advancing a narrow $500 billion bill last month. Senate Republicans have been transparent about opposing a big spending bill and met with Mnuchin and chief of staff Mark Meadows to discuss their fiscal concerns.

Congress was able to successfully and swiftly pass massive spending measures back in March, but most of the benefits established in the Cares Act have expired, igniting an economic strain on the current state of the economy. Economists have suggested that the White House and Congress must act in the same manner if Americans want to see a smooth path towards economic recovery.