Pelosi Says Biden Shouldn’t Debate Donald Trump: "I Don’t Think That There Should Be Any Debates" 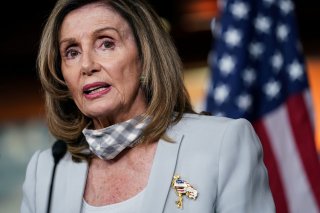 President Donald Trump and Democratic nominee Joe Biden are slated to play political football on the debate stage as early as next month, but House Speaker Nancy Pelosi (D-California) thinks the former vice president shouldn’t even “legitimize a conversation” with the president, suggesting to cancel the three scheduled debates.

“I don’t think that there should be any debates,” Pelosi told reporters Thursday. “I do not think that the president of the United States has comported himself in a way that anybody has any association with truth, evidence, data and facts.”

“I wouldn’t legitimize a conversation with him nor a debate in terms of the presidency of the United States,” she added.

Pelosi’s comments come after several other Democrats proposed that Biden should sit out the debates, considering his significant polling advantage. Media outlets have also suggested that the presidential debates be “scrapped,” with some Republican analysts saying it’s the media’s push to help keep Biden from debating Trump.

“I think that he’ll probably act in a way that is beneath the dignity of the presidency,” Pelosi said of Trump, and later referred to Trump’s “disgraceful” performances in the 2016 debates when he was “stalking” former Democratic presidential candidate Hillary Clinton.

Instead of having the three debates, Pelosi recommended the two take individual stages and respond to questions relating to their ideals and policies heading into November. She proposed the separate performances should be a “conversation with the American people,” rather than “an exercise in skullduggery”—a phrase she used to describe a typical debate with Trump.

Republicans have taken to Twitter about Pelosi’s suggestions, emphasizing that Democrats have little confidence in Biden’s candidacy and distrust his ability to debate Trump in a live, one-on-one setting.

The Trump campaign pressed for a fourth and earlier debate to align with potential early voters, but the request was rejected.

After hearing Pelosi’s advice, a Biden spokesman dismissed the suggestion, noting that the Democratic nominee “looks forward” to challenging Trump on the debate stage.

“We certainly agree with Speaker Pelosi on her views of the President’s behavior,” Biden campaign spokesperson Andrew Bates said. “But just as she has powerfully confronted that behavior in the Oval Office and the Cabinet Room, Joe Biden looks forward to doing the same on the debate stage.”

Pelosi hinted her thoughts in regards to Biden debating Trump last week during an interview with David Axelrod on his podcast called “The Axe Files.”

“My view, I wouldn’t even debate Trump because unless you have a lie detector, or a truth teller,” she said.