Pence Rejects That Trump Downplayed the Threat of the Coronavirus 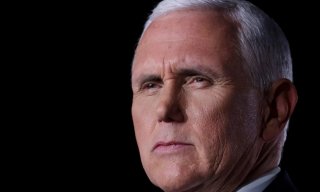 Vice President Mike Pence on Thursday rejected that President Donald Trump’s handling of the coronavirus limited the country’s response to contain the outbreak, despite private remarks the president made about admitting to downplaying the threat of the virus.

“Absolutely not,” Pence told Fox News when asked if Trump’s comments about the lack of severity of the virus hindered the United States from responding to the pandemic forcefully and aggressively.

“His tone was one of projecting calm and confidence,” Pence said. “But I heard him at that podium, I heard him at every setting. We gave the American people the facts."

Pence’s remarks come after Trump drowned in intense criticism due to the released audio recordings of the president discussing the threat of the coronavirus outbreak with veteran journalist Bob Woodward for an upcoming book titled, “Rage.”

Trump provided eighteen interviews for Woodward’s book, noting in early February that the coronavirus “is deadly stuff”—despite saying it was no more harmful than the common flu—and in mid-March, he said, “I wanted to always play it down.”

“I wanted to, I wanted to always play it down. I still like playing it down, because I don’t want to create a panic,” Trump told Woodward.

On Fox News, Pence praised Trump’s leadership during the pandemic and added to the president’s plea of not wanting to create panic or havoc in the country as the coronavirus struck the United States and left more than 191,000 Americans dead.

Pence, leader of the White House coronavirus task force, also championed Trump for his move to suspend travel from China at the beginning of the pandemic, as the ban represented “exactly the kind of presidential leadership that the American people hope for.”

“I literally believe that the president’s decision to suspend China, the largest mobilization since World War II, and asking the American people to shut down our economy for forty-five days to slow the spread to save lives is exactly the kind of presidential leadership that the American people hope for and pray for in times like this,” Pence said.

The audio recordings for Woodward’s book will likely be harmful to Trump’s reelection chances in November and will be at the center of the presidential debate later this month, as the president admitted to publicly downplaying the threat of the coronavirus in the tapes.

When asked whether it was a good idea for Trump to participate in the interviews with Woodward, Pence did not give a clear response.

“I ran into Bob Woodward, I think, once in the White House,” Pence said. “I wasn’t aware of the number of times the president spoke to him.”

“I don’t know if there’s ever been a more accessible president of the United States than President Donald Trump,” he added.