Spain is About to Pour Gasoline On an Economic Fire 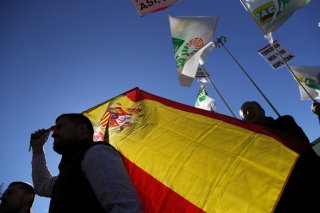 The United States has endured terrible economic losses during the pandemic, but a quick look across the Atlantic in Spain can easily show us that it could be a lot worse.

In the first six months of 2020, Spain’s economy contracted by a disastrous 22.7 percent. This is the steepest economic decline among all developed nations—double that of the United States. In fact, it’s Spain’s worst GDP drop since the Spanish Civil War. Decades of fiscal irresponsibility due to bloated government spending, too, constrained Spain’s government response just when Spaniards needed government support the most. Now, instead of propping up struggling businesses, Spain’s socialist government simply wants to raise their taxes.

In July, Prime Minister Pedro Sánchez announced he would like to follow the National Bank of Spain's recommended Value Added Tax (VAT) hike—even though this tax increase would target businesses most impacted by the recession and push even more Spaniards into unemployment. If the Spanish government is truly in desperate need of revenue and unwilling to cut bloated government spending, the answer can’t be to stomp on business owners trying to keep their heads above water. Instead, the government should look to eliminate tax loopholes.

Right now, Spain taxes most goods and services at a 21 percent VAT rate (a form of sales tax). Restaurants and hotels receive a preferential tax rate of 10 percent, and food and other products are taxed at 4 percent. The proposed tax increase would focus on the 10 percent rate that affects restaurants and hotels taxes precisely when they need more economic support. Spain’s tourism industry has seen major drops in revenue, and one-in-five of its restaurants are likely never to reopen due to the shutdown. Even without the tax increase, the OECD is projecting that Spain’s unemployment rate will climb to 25.5 percent this year.

As a rule, governments should avoid raising taxes during recessions because it leads to lower economic growth and fewer jobs when people need them most. Increasing the VAT reduces a businesses cash flow since many firms absorb part of the tax without passing it to the consumer. Cash-poor businesses will be forced to lay off more workers, postpone investments, or close down completely. Small businesses with limited resources and no access to capital will be hurt the most. Some establishments will raise prices to adjust to the tax, increasing the cost of living for hardworking Spaniards—at least 600,000 of whom have lost their jobs permanently since the start of the pandemic. If the tax hike is made law, many small businesses are bound to go bankrupt, since they’ll no longer be able to compete with large corporations.

But Spain could easily consider following the lead of most other European countries. Germany and the UK cut their VAT for industries heavily affected by coronavirus. Evidence from VAT cuts during the great recession suggests that many businesses retain part of the tax savings. After all, tax cuts increase cash flow for businesses, keeping them alive during hard times.

Even so, there is a way to raise more revenue without targeting struggling businesses. Spain has one of the European Union’s (EU) largest tax-gaps. This means that, thanks to preferential rates, VAT revenue is less than ideal. Some people justify the lower tax rate for “essential” products on the basis that it benefits the poor. Yet, a report by the Organization for Economic Cooperation and Development found that VAT exemptions actually benefit the wealthy more than the poor because higher-income individuals spend more on tax-preferred goods and services.

An EU study shows that, on average, Spaniards pay only an 8.5 percent VAT rate on the goods and services they purchase because most goods are taxed at the preferential 4 percent rate rather than the 10 or 21 percent.

By unifying its three VAT rates in a single low rate—ideally, between the average 8.5 percent rate and the existing 10 percent rate—the Spanish government could close its budget deficit without hurting industries in dire need of help. No industry or product would have a preference over another, and the hospitality sector would be spared further trouble or even benefit from reform.

Spain’s economy already faces unprecedented challenges, but its government should reach for a cold bucket of sound economic policy instead of throwing gas on the fire.

Daniel Di Martino is an economist, Young Voices contributor, and research associate at the University of Kentucky’s Institute for the Study of Free Enterprise. Follow him on Twitter @DanielDiMartino.

Travis Nix is a contributor for Young Voices and a student of tax law at Georgetown Law. Follow him on Twitter @tnix113.