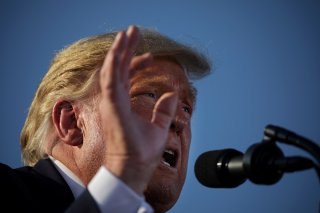 President Donald Trump has revived his months-long approach to downplay the severity of the coronavirus on his final campaign sprint as the election is just fourteen days away.

In recent days, Trump argued to waves of supporters at packed campaign rallies that Americans are tired of coronavirus news coverage and that the deadly disease sits in the rearview mirror, even as positive cases are climbing in at least thirty states and more than 220,000 Americans died from the infection.

“They’re getting tired of the pandemic, aren’t they,” Trump told a crowd of hundreds of unmasked supporters on Monday at a campaign rally in Arizona. “You turn on CNN, that’s all they cover. Covid, Covid, pandemic, Covid, Covid, Covid . . . You know why? They’re trying to talk everybody out of voting. People aren’t buying it, CNN. You dumb bastards.”

The president’s comments come just hours after he reportedly bashed Dr. Anthony Fauci, the nation’s top infectious disease expert, dubbing him as “a disaster” and reiterated that “people are tired of COVID.”

“People are tired of hearing Fauci and these idiots, all these idiots who got it wrong,” Trump said on a campaign call with staffers. “He’s been here for five hundred years,” adding, “Every time he goes on television, there’s always a bomb, but there’s a bigger bomb if you fire him. This guy’s a disaster.”

“People are tired of COVID,” Trump said. “I have the biggest rallies I have ever had and we have COVID. People are saying whatever, just leave us alone. They’re tired of it.”

Over the weekend, the president held a large rally in Wisconsin with voters standing shoulder-to-shoulder, where he minimized the threat of the virus in a state suffering from overcrowded hospitalizations and record-high surges in positive cases.

“We’re rounding the corner,” Trump said on Saturday. “We have unbelievable vaccines coming out real soon.”

Trump also blasted Wisconsin’s Gov. Tony Evers’s (D) attempt to contain the virus, as Evers tried to limit capacity in businesses across the state, a push that was blocked by a county judge.

“We’re doing great, we’re doing really well. I wish you’d have a Republican governor because frankly, you got to open your state up,” Trump said. “You got to open it up.”

Trump’s dismissive tone towards the virus marks an ongoing campaign strategy that he’s practiced, as his handling of the coronavirus destroyed his smooth path to victory on Nov. 3. The virus has had massive impacts on unemployment, the closing of small businesses, and put millions of Americans into poverty, which has been disproportionately affecting black and Hispanic communities across the country.

Although his final campaign strategy to put the coronavirus behind voters seems at odds with the current state of the infection, it’s not a ground-breaking strategy. Trump has consistently rejected the seriousness of the pandemic since its initial onset in January.

“He is sticking to the decision he made early on to avoid emphasizing the threat that he learned about last January, even though it has affected him and others around him—though he seems to think it has not been serious, perhaps since no one died,” Robert Y. Shapiro, professor and former chair at Columbia University’s Department of Political Science. “The issue has hurt his chances—the public health issue plus more important its economic effects—if the economy had stayed strong he might be sailing to victory now. So he is trying to get voters to ignore these bad outcomes.”

Shapiro and other political science experts said that Trump’s final approach to mobilize voters to back his re-election bid by downplaying the coronavirus will not attract undecided or independent voters, groups that could potentially determine the election results in an already tight race for the White House.

“His earlier message, which was that he has managed the crisis better than Biden would have, seems not to have gotten much traction, and so his new message seems to be that COVID-19 is old news.” Donald Green, author and professor of political science at Columbia University, said. “A better approach would have been to take advantage of his status as incumbent—to look as though he is taking the problem seriously, visiting hospitals, issuing orders to facilitate vaccine distribution, and the like.”

Trump has said in the past that he handled the boiling health and economic crises better than Democratic nominee Joe Biden would have managed, but polls indicated that voters believe Biden would have done a better job at handling the pandemic.

Shapiro suggested that the president should focus on his stances relating to law and order and immigration in the final days of the election season, both issues that aided his presidential candidacy in 2016, as well as “reminding voters of his accomplishments which the Democrats will undo” if the Senate and White House switch blue.

Trump and Biden will go head-to-head on the debate stage Thursday in Tennessee in their last final appearance together before Election Day, which is when fighting the coronavirus will be a main topic for the night, along with race in America, climate change, national security, leadership and American families.