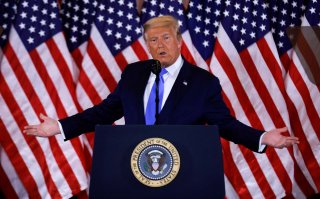 President Donald Trump’s campaign slung a series of legal strikes Wednesday in several battleground states including Pennsylvania and Michigan, along with a complete recount in Wisconsin, as the seething race for the 270 Electoral College votes grows tighter.

The lawsuits mainly request increased access for campaign observers at vote-counting locations and to halt the count until full “transparency” is granted to the campaign.

“The lawsuits intending to stop the counting, in states where he is ahead, hardly seem serious, as they are proceeding according to state laws,” Charles Stewart III, a professor of political science at the Massachusetts Institute of Technology, said. “His campaign has also filed suits concerning the observation of the counting; because the counting is already being observed by the campaign, it’s hard to see that they will have a meaningful effect.”

Here are the states that Trump has initiated a lawsuit or a recount relating to the election results.

In a battleground state that still remains uncalled even two days after Election Day, Republicans launched nearly a half-dozen legal pursuits in Pennsylvania this week.

The Trump campaign filed one lawsuit that calls for halting all vote-counting “until there is meaningful transparency,” demanding stronger access for campaign observers at polling locations where ballots are being processed and counted.

The president’s campaign has also pushed to intervene in a Pennsylvania case pending before the Supreme Court that deals with whether ballots received up to Nov. 6 should be included in the election count.

The state Supreme Court ruled for mail-in ballots postmarked by Election Day to be processed and counted as long as they arrive by Friday, a major win for Democrats as Biden’s campaign pushed for actively using mail-in ballots for this presidential election to provide an alternative method of voting to tame the fears of contracting the virus at an in-person polling location.

A GOP-led effort requested legal assistance from the Supreme Court regarding the case in recent weeks and were rejected, but three conservative justices on the court said they would be open to resurfacing the issue. As suggested by the nation’s highest court, state officials have been segregated late-arriving ballots from the rest.

“There is a strong likelihood that the State Supreme Court decision violates the Federal Constitution,” Justice Samuel A. Alito Jr. wrote.

Trump’s team saw a minor legal victory Thursday afternoon when Philadelphia temporarily stopped its mail-in ballot counting to address a court ruling but quickly resumed after an appeal was sent to the state Supreme Court.

The Trump campaign has also launched attacks at the state’s voter identification rules, noting that they plan to dispute Pennsylvania’s guidance on the rules.

“I don’t think state courts will have much patience with lawsuits that are seen as harassing election officials who are trying to proceed according to state law,” Stewart said.

While not all of the votes have been counted, several media outlets, including The Associated Press, projected Michigan for Biden.

Amid the call, the Trump campaign filed a lawsuit against Secretary of State Jocelyn Benson, claiming that the counting of absentee ballots has not been conducted through a bipartisan effort. They called to halt the tallying of remaining ballots, as the campaign has been denied “meaningful access” to observe the vote-counting process.

“President Trump’s campaign has not been provided with meaningful access to numerous counting locations to observe the opening of ballots and the counting process, as guaranteed by Michigan law,” Trump campaign manager Bill Stepien said in a statement. “We have filed suit today in the Michigan Court of Claims to halt counting until meaningful access has been granted. We also demand to review those ballots which were opened and counted while we did not have meaningful access. President Trump is committed to ensuring that all legal votes are counted in Michigan and everywhere else.”

With 98 percent of Georgia’s vote reported, Trump remains in the lead as of Thursday afternoon with 49.5 percent of the state’s support, according to the New York Times, making the race for 16 electoral votes uncalled.

On Wednesday, the Trump campaign, along with the Georgia Republican Party jointly pushed through a legal effort claiming that absentee ballots that arrived after the state’s imposed ballot deadline might have been tallied.

According to Fox News, a poll watcher in Chatham County said that a stack of unprocessed ballots appeared to be intertwined with ballots that have already been counted and processed. When the watcher requested more information from a county official on the stacked ballots, he was denied a response.

As of Thursday afternoon, Nevada, a traditionally blue state, still remains uncalled as Biden tightly leads in the state’s voter support at 49.4 percent.

To add to the wave of GOP lawsuits, the Nevada Republican Party and the Trump campaign fueled some last-minute legal efforts to halt the count of some mail ballots, specifically in Clark County— a deeply Democratic county that’s given Biden a strong ground in the state.

Despite the Republican push, Clark County will continue to count and process ballots under its original guidelines.

Per county rules, officials must tally any mail ballots that have been postmarked by Nov. 3, but their ballot arrival deadline stands at Nov. 10, a week after Election Day. The county must be finished with their canvass by Nov. 16, and a county spokesman said Thursday that the region anticipates all mail ballots will be tallied by Saturday or Sunday.

The Associated Press called for a Biden win in Wisconsin on Wednesday afternoon with 99 percent of the total vote counted.

With the margin razor thin, Trump requested a recount in the state, a move that the Biden campaign attacked given that then-Democratic nominee Hillary Clinton lost by a similar margin against Trump in 2016.

“When Donald Trump won Wisconsin in 2016 by roughly the same amount of votes that Joe Biden just did, or won Michigan with fewer votes than Joe Biden is winning it now, he bragged about a ‘landslide,’ and called recount efforts ‘sad,’” Biden campaign spokesperson Andrew Bates told Fox News. “What makes these charades especially pathetic is that while Trump is demanding recounts in places he has already lost, he’s simultaneously engaged in fruitless attempts to halt the counting of votes in other states in which he’s on the road to defeat.”

“Once he gets into recounts, there are lawsuits concerning the protection of the ballots which may be more successful, but we have to get to that point in the first place,” Stewart said.