Trump in Trouble? Joe Biden Leads by 9 Points in Pennsylvania 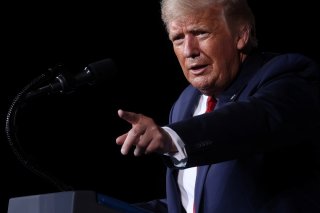 Democratic presidential nominee Joe Biden has a nine-point lead over President Donald Trump among likely voters in Pennsylvania, a crucial swing state where Biden was born.

Biden and his running mate, Sen. Kamala Harris (D-Calif.) have 53% of support from likely voters in the state, while Trump and Vice President Mike Pence are backed by just 44%, according to a new NBC News/Marist poll released Wednesday.

In 2016, the Keystone State helped the president land a spot in the Oval Office, as he won the state’s support by less than 1 percentage point. Pennsylvania is a must-win battleground state, where Biden has spent more time than anywhere else — besides his home state of Delaware — campaigning for the upcoming election.

Trump also received a fairly low job approval rating among likely voters, as 45% approve of the job he’s been doing and 52% disapprove. Just 44% have a favorable impression of the president, with 54% having a negative one.

Born in Scranton, Biden had a net positive favorability rating with likely voters in the state. Fifty percent view him favorably, compared to 46% thinking of him negatively.

“With Trump’s job approval rating and favorability upside down, he needs to reshuffle the deck to close the gap,” Lee M. Miringoff of the Marist College Institute for Public Opinion said. “Trump’s best bet is on the economy to do just that.”

The survey indicated that Pennsylvania voters think Trump will do a better job at handling the economy, with the president at 51% of support and Biden at 41%. Biden, however, has a double-digit edge over Trump when it comes to handling the coronavirus, 53% to 38%.

The Biden-Harris ticket towers over the Republican presidential bid among suburban and college-educated voters in Pennsylvania. Biden leads Trump by nearly 20 points among likely voters in the suburbs, 58% to 39%. The poll noted that this represents a “significant flip from 2016,” as Trump held most of the suburban vote in the state when he led by about 8 points, according to exit polls.

Among likely voters with college degrees, Trump’s support is underwater as the Democratic nominee leads the president 63% to 34%. The Democratic ticket also leads among women, at 59% to 38%.

Although Biden has an edge over Trump in some key groups from the battleground state with the election just two months away, both candidates are tied at 49% among white voters in Pennsylvania, a group that Trump won by double-digits in 2016.