Trump vs. Biden: Will the 2020 Election Be Decided in a Courtroom? 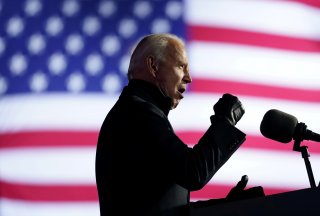 The scorching coronavirus pandemic, dwindled economy and Election Day turmoil aren’t the only issues at hand in this year’s presidential election. It’s time to add one more to the list: relentless court battles between President Donald Trump and Democratic nominee Joe Biden in the event of close election results, especially in battleground states, to make sure all ballots get counted or disbarred.

Both Trump and Biden’s campaigns have prepared legal teams of thousands of lawyers to call the shots in the courtroom, as the debate over counting ballots has assumed a new urgency in this year’s presidential election.

“We're going to go in [the] night of, as soon as that election is over, we're going in with our lawyers,” Trump told reporters Sunday, referring to legal matters over whether ballots in Pennsylvania and North Carolina—both crucial swing states—should be counted if they arrive post-Election Day.

Nearly three hundred lawsuits are already in the works over the election in several states across the country, including in battleground states that could likely determine the final election results like Pennsylvania, North Carolina and Minnesota. Both sides of the aisle are pinning the blame on the other to interfere with the 2020 election results, with most of the legal challenges stemming from the surge in mail-in and absentee voting accelerated by the pandemic.

“I don't think it's fair that we have to wait a long period of time after the election. Should've gotten their ballots in a long time before that. Could’ve gotten their ballots in a month ago. I think it's a ridiculous decision,” Trump said, referring to the Supreme Court’s ruling to not block state court decisions that have allowed certain extensions.

Democrats advocate for extending existing early voting rules to cope with the setbacks of the coronavirus pandemic, while Republicans argue that the party is trying to mitigate the rules to secure a White House win in November. Trump claims that mail-in voting is not as reliable as in-person voting, as there could be increased chances of voter fraud. The president’s beliefs, however, remain largely unproven, according to several experts, as there have only been minor incidents of people meddling with mail-in ballots.

“Trump’s stated rationale for opposing large-scale mail-in voting might be voter fraud, but since there is no reason to think that this occurs beyond miniscule levels—even in the area of mail-in and absentee voting—there is little reason to believe him,” David Alexander Bateman, associate professor of government at Cornell University, said. “The real reason why he wants these ballots invalidated is the same that explains why the Republican party has been active on voter suppression for over a decade now: there is a partisan advantage to it.”

John Aldrich, a Pfizer-Pratt professor of political science at Duke University, echoed Bateman’s concerns, as he noted that “While it is true that there is a chance of fraud with mail-in votes, and while it is true that increasing both the diversity of mail-in procedures and the frequency with which they are being used, almost be definition, makes those chances higher than if it is restricted in use as it was before the pandemic, and used by many fewer people, there is no basis for his belief. All of the states that have had extensive use of mail-in voting have not experienced significant fraud.”

Aldrich added that “mounting evidence” has indicated that mail-in voting is more commonly used by Democrats than Republicans, so if Trump can, “somehow, undermine those sorts of voting, he will win a higher percentage of the votes counted. It appears that he would like to have the perception that he lost the election, if he does, be attributable to fraud and cheating rather than to not being the voters’ choice.”

Trump’s campaign has established “Lawyers for Trump,” a coalition aimed at protecting the election results, with the group alerting Americans that “Democrats are trying to use coronavirus and the courts to legalize ballot harvesting, implement a nationwide mail-in ballot system and eliminate nearly every safeguard in our elections.”

“Trump wants to invalidate ballots that arrive after election day for the sole and unique reason that these are more likely to be Democratic than Republican-leaning votes,” Bateman said. “It would be nice to condemn both parties on this front, this cycle, but the simple logic of it is that Democratic voters are more likely to be casting mail-in votes this year and so Republicans want them to not be counted.”

Meanwhile, Biden’s campaign has been quietly structuring a broad “election protection program” that includes former Attorney General Eric Holder, as well as other lawyers who are assembled to battle in the case of a contested election. According to POLITICO, Biden’s campaign fundraising efforts have pivoted toward post-Election Day legal fight preparation against Trump and his allies that could fizzle into most of November.

In recent calls with people close to Biden’s campaign, as reported by the publication, the legal team is developing a response to counter impending lawsuits from the president in the event of close or contested election results in battleground states, in which the re-allocated funds would support the push from lawyers working for Biden’s campaign and candidacy.

In Pennsylvania—a battleground state that reveals Biden with nearly a three-point average lead over Trump in the polls—election officials are expected to process absentee ballots on Nov. 3, with some counties waiting until the next day to start tallying the votes. Pennsylvania Secretary of State Kathy Boockvar said Sunday that she anticipates an “overwhelming majority” of ballots will be counted in upcoming days following the election, a move that’s nothing new as military votes in past elections are not received until days after Election Day.

Friday marks the last day of receiving and tallying Pennsylvania absentee and mail-in ballots, which is an extension decided by the state’s court. With Republicans pressing against the court’s decision, several justices have said they would review the issue again after Nov. 3 in the event of a close or contested election. Boockvar noted that ballots received after Election Day will be segregated from the rest in case the court’s ruling is resurfaced.

In North Carolina—a state that Trump won in 2016—the court let stand lower court rulings that enabled the state’s board of elections to lengthen the ballot deadline to nine days after Election Day, in a decision with dissent by three conservatives on the court.

“The pandemic pushed so many states to try so many different things about the election that not only did that increase differences from state to state, but it also means that they arrived at their procedures in different ways,” Aldrich said. “There is a longer-term remedy and that is to write laws more uniformly, and that might well be the Congress writing federal laws about voting (at least for federal offices) to achieve that uniformity.”

In Minnesota—another swing state that Biden’s rallied a lead in—has been discouraging voters from mailing ballots at this point in the race, and any ballots that arrive late will be separated from the rest as the legal battle has not been decided yet.

Members of the GOP insist that Democrats are trying to change state-level rules, but experts say that it’s not uncommon for state legislatures and judiciaries to alter ballot proceedings.

What Experts are Saying

“State legislatures and judiciaries alter ballot rules all the time, and have every reason to do so in the wake of an ongoing pandemic that makes in-person voting difficult and potentially dangerous,” Bateman said. “States' expansion of mail-in ballot rules reflect legislative efforts to either ensure that all votes are counted or judicial efforts to ensure that the requirement of free and equal elections in a state's constitution be realized.”

Other political science experts also noted that due to the impacts of the coronavirus pandemic, it’s critical for states to provide adjusted timelines and ballot options for their residents.

“Voting is a fundamental right of all citizens that needs to be protected. Certainly, it makes sense for states to extend deadlines, given that we are living through a once-in-a-century pandemic, with Covid rates are on the rise all over the nation, and because on top of this, the Trump Administration has permitted a slowdown of US mail services,” Suzanne Mettler, professor of government at Cornell and author of the recent book, Four Threats: The Recurring Crises of American Democracy, with Robert C. Lieberman, said.

With states having differing ballot deadlines, it collides with Trump’s dream to push for a Nov. 3 presidential call. But another expert noted that if the president is ahead on election night and assumes a second-term, “his declaration of victory may cast doubt on the legitimacy of the ultimate count,” according to Devin Caughey, associate professor of political science at the Massachusetts Institute of Technology, said.

“If he declares on Election Night, while he is, is still ahead, he may be able (through legal or extralegal means) to stop [the] count from being completed,” Caughey added. “Even if he does not succeed in stopping the count, his declaration of victory may cast doubt on the legitimacy of the ultimate count. This echoes Republican strategy in the 2000 recount in Florida.”

Here Comes AOC: How She Is Changing U.S. Politics In Big Ways