Trump Won't Like This: Is the 2020 GOP Convention in Florida Doomed? 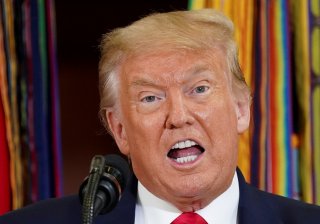 Five Republican senators have announced they won’t be attending the Republican National Convention (RNC) expected to take place in Jacksonville, Florida next month as the state becomes the epicenter for new coronavirus cases.

The convention is supposed to take place in August, where President Donald Trump will formally accept his 2020 presidential nomination in an arena that fits more than 10,000 people.

Senate Majority Leader Mitch McConnell noted on Thursday that “the convention is a challenging situation” since the numbers in Florida have surged in recent weeks.

"Well, I think the convention is a challenging situation," McConnell said in Kentucky. "A number of my colleagues have announced that they are not going to attend, and we'll have to wait and see how things look in late August to determine whether or not you can safely convene that many people."

With the news of GOP colleagues considering not attending and the rise in new coronavirus cases in Florida, Trump said “we’re very flexible” when asked if he still wants to hold such a large convention during an interview with Gray Television on Tuesday.

RNC spokesman said attendees will be tested daily for the coronavirus, and other health measures will be taken. Personal protective equipment and hand sanitizer will also be provided.

The RNC was supposed to take place in North Carolina, but Trump and the GOP changed locations when the state’s governor announced a potential attendance cap and strict rules for the event.

Despite the efforts from the RNC to make the event safe, Florida-based doctors and attorneys have taken initiatives to postpone the event.

Around 200 doctors wrote to Jacksonville Mayor Lenny Curry (R), emphasizing the spike in coronavirus cases in the Sunshine State and noting the size of the event which is expected to bring in people from all over the US.

After coming into contact with someone who tested positive for the virus, Curry and his family are in self-quarantine at home. The mayor tested negative but still remains isolated just in case.

"Allowing this number of people to descend on Jacksonville is unequivocally provocative of disease, predictably harmful, and medically disrespectful to the citizens of this city, much less the rest of the country," the letter from the doctors said.

Duval County, where Jacksonville is located, has more than 11,000 confirmed coronavirus cases and more than 70 deaths.

Jacksonville attorneys filed a lawsuit on Wednesday against the city to prevent the GOP convention. The attorneys listed a number of reasons, including that it would be harmful to the public health of the state.

Florida is a hotspot for coronavirus, as the number of confirmed cases approaches 225,000, according to John Hopkins University data.