Trump's Big Mistake: His Immigration Restrictions Are a Disaster 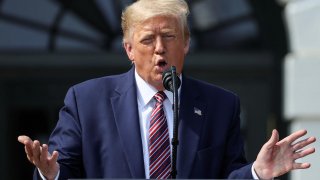 President Trump banned nearly all permanent immigration and temporary workers last month for the remainder of the year. His order will affect as many as half a million workers and immigrants if consulates reopen, other COVID-19 travel restrictions are lifted, and migration resumes to last year’s levels. It will also affect about 20,000 U.S. employers seeking to hire foreign workers over the next six months.

Tables 1 through 5 show the number of petitions that the government has approved for individual employers to sponsor workers for visas or status, the share of workers who fit into those categories who are outside the United States (and subject to the ban), the number of employers who received labor certification or labor condition application approvals from the Department of Labor (DOL) allowing them to petition for workers, and the number of employers who received approved petitions from U.S. Citizenship and Immigration Services (USCIS). The years reflect the most recent data publicly available.

The employment‐​based second and third preference categories saw 924 employers receive labor certification approvals for workers abroad (Table 3), and 776 of them were eligible to petition for their employees to receive immigrant visas to travel here. The L-1 category data are older but show 7,020 employers in 2018 receiving approvals for initial L-1 petitions (Table 4). Almost 100 percent of L‐​1s are abroad because the program exists to allow multinationals to transfer foreign employees to U.S. jobsites. The J-1 Summer Work and Travel Program is even older—from 2015—but the size of the program has been similar in recent years. In 2015, nearly 16,000 employers hired J‐​1s under the Summer Work and Travel Program (Table 5). Nearly all hires appear to have occurred abroad, but no public data on the share is available.

Using the employment data from the most recent years shows about 55,000 unique employers across all these programs. Assuming that the share of hires abroad reflects the share of employers who exclusively hiring workers abroad, a little more than 6 months would normally see a little less than 20,000 distinct employers submit petitions, sponsor, or hire for foreign workers in these categories.[1]

Note that this doesn’t include a small number of employers of EB-1 category for the highest skilled immigrant visa applicants. It also excludes the employers of a large number of J-1 visa holders in programs other than the Summer Work and Travel Program.

The United States government is harming its own industries, making the country less competitive and attractive for businesses who employ millions of Americans. This policy choice makes no sense and cannot be justified economically.

[1] The raw data for the J-1 Summer Work and Travel Program is not available, but very few J-1 employers (197 of 15,889) hire under the H-2B program, which covers similar lower‐​skilled jobs, so it is fair to assume little overlap with other categories.