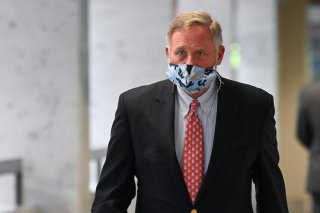 With the revelation that the Justice Department is closely probing his stock trades in February, North Carolina Sen. Richard Burr has temporarily resigned his position as chairman of the Senate intelligence committee. Other senators have come under scrutiny for potential insider trading, including Kelly Loeffler, James Inhofe, and Dianne Feinstein, but have all stated that their actions were above board. Loeffler sold up to $3.1 million in stocks in late February and early March and her husband is the head of the New York Stock Exchange. Feinstein has turned over documents to the Justice Department about stock trades executed by her husband.

After refusing to comment earlier this morning, Senate Majority Leader Mitch McConnell issued a statement that explained that Burr had contacted him “this morning to inform me of this decision to step aside as Chairman of the Intelligence Committee during the pendency of the investigation.” This development came after it was reported that the FBI had seized Burr’s cell phone on Wednesday as part of an investigation into stock dealings in February. Burr sold up to $1.7 million in stocks a week before the market began to plummet as a result of the widespread fear of the impact of the coronavirus on the American and world economy.

In his capacity as chairman of the committee, Burr obtained classified intelligence that explicitly warned about the perils represented by the coronavirus. At the time, President Trump was suggesting that the coronavirus did not in fact pose a significant threat to the American economy. Burr himself co-wrote an op-ed saying that America could easily handle the coronavirus, stating that it was “better prepared than ever before to face emerging public health threats.”

Democrats are seizing upon Burr’s action to demand that he resign from the Senate entirely. North Carolina has a Democratic governor who would appoint a replacement for Burr. If Burr were to resign, it would likely create two competitive races in North Carolina in 2020 as Thom Tillis is up for reelection, thereby increasing the chances of a Democratic takeover of the Senate. Burr himself has indicated that he does not intend to run for re-election in 2022. He stated Thursday that he believed the issue of his stock sales was a mere sideshow: “This is a distraction to the hard work of the committee, and the members, and think that the security of the country is too important to have a distraction.”

His resignation comes at a moment when the committee was preparing to finish its protracted investigation of Russian interference into the 2016 election campaign. Who will replace Burr as head of the committee is unknown, though leading candidates based on seniority include senators Jim Risch, Susan Collins and Marco Rubio. Each could leave their own stamp on the final committee document. The resignation of Burr is certain to raise the stakes surrounding it.

At the same time, his resignation will heighten the public controversy over his and other senators’ financial actions during the early months of the coronavirus pandemic. The political fallout from the virus may only have begun.