Was Donald Trump Wrong for Holding an Indoor Rally in Nevada? 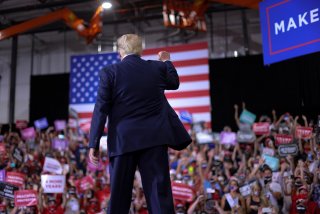 Sisolak took to Twitter about the rally, noting that Trump “is knowingly packing thousands into an indoor venue to hold a political rally” and added that the president has “forgotten that this country is still in the middle of a global pandemic.”

Trump held his first indoor rally in several months in Henderson, Nevada, where most attendees appeared to be maskless and not socially distanced. Campaign aides insisted that all attendees were temperature checked before being allowed into the rally and given a face covering that would be “encouraged” to wear.

“This is an insult to every Nevadan who has followed the directives, made sacrifices, and put their neighbors before themselves," Sisolak said. “It’s also a direct threat to all of the recent progress we've made and could potentially set us back.”

The governor added that Trump “is taking reckless and selfish actions” that are jeopardizing the lives in Nevada.

Trump responded to the attacks from Sisolak in an interview with the Las Vegas Review-Journal Sunday night, saying that he thought he wasn’t subject to Nevada’s rules and also condemned Sisolak for making his campaign nix his outdoor rally Sunday.

At the rally in Henderson, Trump shouted to the crowd, “Tell your governor: Open up your state!”

“They canceled six different sites because the governor wouldn’t let it happen, all external sites,” Trump told the local publication.

Henderson officials released a statement late Sunday that noted that they warned event organizers that they must obey the governor’s orders of indoor gathers of no more than fifty people, wearing face masks and practicing social distancing.

“The City of Henderson has issued a compliance letter and verbal warning to the event organizer that the event as planned would be in direct violation of the governor’s COVID-19 emergency directives. Specifically, gatherings of more than fifty people in a private or public setting is prohibited,” a city official told CNN.

Tim Murtaugh, the Trump campaign 2020 communications director, responded to the issues surrounding the rally saying, “If you can join tens of thousands of people protesting in the streets, gamble in a casino, or burn down small businesses in riots, you can gather peacefully under the First Amendment to hear from the president of the United States.”