What Happened to the Democrats’ Blue Wall? 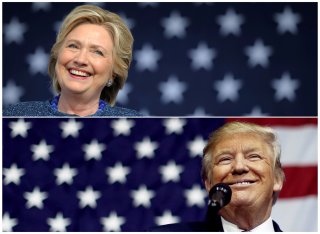 In 2016, former Secretary of State Hillary Clinton's bid for the White House came crashing down when Donald Trump smashed the so-called “blue wall”—narrowly winning victories in the states of Michigan, Pennsylvania and Wisconsin. Those states had gone for a Democratic presidential nominee in every election from 1992 to 2012—but it would be wrong to consider them true “blue states.”

Clinton certainly misread the support she had in those states, which had actually been far more competitive in recent elections. Additionally, Pennsylvania and Wisconsin both had Republican senators—who both ran successful re-election campaigns and thus acted as surrogates for Trump—while Michigan had a Republican governor.

The signs should have suggested that those states weren’t solidly part of the blue wall.

Another factor in the 2016 election was that Michigan had been seen by pundits as a blue state, due to its twenty years of support for Democrats, yet it is no California or New York. Races have been far closer than in true deep blue country.

It is the land of Reagan Democrats who care about jobs far more often than social issues.

“Michigan has been a battleground state over most of the presidential elections in the past 20-30 years,” said John Klemanski, professor of political science at Oakland University.

“In that regard, I think you could call it a purple state,” Klemanski told the National Interest via email. “Even though it was part of the blue wall supporting Democratic presidential candidates between 1992 and 2016, most of the elections were close—and many of those cases, within five percentage points. Exceptions were 1996 and 2008 when the entire nation voted for the Democratic candidates in a fairly big way."

Down to Three—But it Could be Michigan

This year’s election map could come down again to the same three states of Michigan, Pennsylvania and Wisconsin, which still have yet to be called as mail-in votes are counted. Throughout the evening of Election Day pundits were focused on Pennsylvania, and the Keystone State was reported to be the key to this election.

However, it could actually come down to Michigan. As the morning counts shaped out Trump maintained a lead in Pennsylvania while former Joe Biden has surged ahead in Wisconsin. That leaves Michigan as being the state that could determine the next President.

The Issues of Michigan

Even as cases of coronavirus have been on the rise in Michigan, many suburban and rural voters have remained focused on the economy.

“The state’s voters are concerned about jobs and the economy for the most part,” explained Klemanski. “Donald Trump was successful in Michigan in 2016 because he talked about the manufacturing jobs that left the state, and how NAFTA and other free trade policies hurt Michigan’s economy and took away automobile manufacturing jobs. The economy remains an important issue for Michigan voters—even issues such as immigration were connected to the issues of jobs and the economy.”

However, Michigan has also seen heavy turnout in heavily-Democratic Detroit according to hometown newspaper The Detroit Free Press. With 53 to 55 percent voter turnout it could be the highest in more than two decades.

In the run-up to the election, Biden had an eight-point lead in Michigan, but it could all come down to this state.

“Trump may not be out of the woods in Pennsylvania,” said David Dulio, professor of political science at Oakland University. “But if he does win Pennsylvania, then it does come down to Michigan.”

The largely blue-collar suburbs of Detroit in Macomb County were what cracked Michigan as part of the blue wall, and those Reagan Democrats could help decide the election again.

“That is a base that has stayed with Trump,” Dulio told the National Interest. “The numbers right now suggest that Trump held Macomb, but he slid a bit in neighboring Oakland County.”

Voter turnout across Michigan has been far higher than expected, which has been why final results won’t likely be known until later on Wednesday. And that could determine the election.

Dulio noted, “The presidency is going through the upper Midwest again.”