Why Donald Trump's Climate Change Policy Is a Disaster 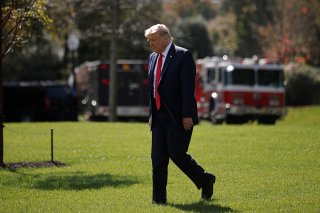 On climate, the Trump administration has not only abandoned the leadership position cultivated under President Barack Obama, but also proactively dismantled domestic environmental policy. Meanwhile, China has “filled the void” that the United States left in climate change mitigation. Despite the Trump administration’s well-documented rejections of climate science, engaging with environmental policy is essential for the administration’s foreign and security objectives, especially strategic competition with China.

China has stopped clinging to “developing nation” status and become a clean energy juggernaut and global climate leader. China is the world’s largest producer of wind and solar energy modules, and five of the six largest solar module manufacturing companies and the largest wind turbine manufacturer are Chinese.

A large portion of the Chinese government’s environmental efforts relate to General Secretary Xi Jinping’s signature Belt and Road Initiative. The Belt and Road International Green Development Coalition for example ties China’s environmental policy to Xi’s signature initiative. “Greening” the BRI attracts more countries to the initiative, effectively papering over continuing issues with Chinese financing practices like economic coercion and debt-trap diplomacy. In turn, this harms American strategic competition with China which is one of the United States’ key interests in the Indo-Pacific Region.

Global Institutions. As one of the only detractors from near-universal agreement on climate change, the United States risks being politically alienated by other nations in favor of Chinese leadership.

By abandoning global institutions like the Paris Climate Accord, the United States only makes room for China to further increase its influence which it can use to set global regulations to America’s disadvantage. President Donald Trump’s move to leave the World Health Organization (WHO) provides a similar situation which only helps China. In the Washington Post, Yanzhong Huang, a professor in the School of Diplomacy and International Relations at Seton Hall University, suggests a U.S. withdrawal would cause the WHO to increasingly turn to China for leadership. The United States risks the same situation on climate as the world looks to China for leadership.

Conversely, China has recognized climate change’s geopolitical value. The Chinese Communist Party (CCP) states that the “Green BRI” is essential for China’s participation in “global environmental governance,” and has created bilateral climate cooperation organizations and initiatives with the European Union and ASEAN. American withdrawal from historic leadership positions only creates a vacuum that China has shown it is willing to fill.

Security. Increased participation in the BRI in the South Pacific could harm American maritime security interests in the region as China could gain assets through debt-trap diplomacy. A prominent example of this practice is when Sri Lanka handed over Hambantota Port to China in a renegotiation of unsustainable debt owed to China. While the agreement bars military use of the port, Sri Lanka remains heavily indebted to China and might need to allow military use in future negotiations—a prospect about which India is especially worried.

Canberra and Washington have been concerned with potential Chinese acquisitions recently, including discussions of military access to ports in Vanuatu, development of the Lombrum Naval Base in Papua New Guinea, and leasing the entire island of Tulagi in the Solomon Islands. A “green BRI” gives China the opportunity to expand their portfolio of projects which could be used for Chinese strategic interests. Rising sea-levels resulting from climate change endangers these low-lying island nations, and Chinese overtures on climate are far more effective messaging strategies than American great-power rivalry in the pursuit of regional access or influence. China’s climate stance was a major factor in the Solomon Islands decision to switch diplomatic relations from Taiwan to China in late 2019, and to sign up for the BRI.

However assets are acquired, China could use them to extend anti-access/area denial capabilities into the region and threaten U.S. strategic access. The South China Sea provides examples where assets like airstrips, hangars, and communications equipment, ostensibly built for benign purposes, could also theoretically have military applications. With a robust climate policy, the United States can counter the Chinese initiatives which make the BRI more palatable to potential partner nations in this key region.

Economics and Trade. While the United States has prospered because it was the first to embrace communications and information technology, China is keen to be at the fore of the latest trend in sustainable and green development. Barbara Finamore, the Asia Director for the U.S. Natural Resources Defense Council, notes while speaking to Politico that China was slow to industrialize, and this failure is tied to the “century of humiliation” at the hands of Western powers and Japan. The CCP is keen to learn from this mistake. In 2017, China accounted for $126.6 billion of renewable energy investment, tripling the U.S.’s $40.5 billion and an order of magnitude larger than Japan at $13.4 billion. If the United States fails to invest in renewable energy at home, it will return to a state of dependence on others for energy, potentially relying on rivals like China for wind and solar modules.

What can the United States do to compete with China on climate? To start, the next administration should reenter the Paris Agreement and reinstate Obama-era regulations that were rescinded under President Trump. Democratic Presidential Nominee Joe Biden has promised in his climate plan to rejoin the Paris Agreement, and lead “an effort to get every major country to ramp up the ambition of their domestic climate targets.” The United States needs effective environmental policies to regain soft power as China continues to gain influence through climate leadership.

The European Union proposed a “carbon border tax,” to shield domestic manufacturing from countries with lax environmental standards. U.S. companies, like European counterparts, are at a competitive disadvantage from “carbon dumping,” or exporting carbon-intensive products. China is the largest steel manufacturer, but is twice as carbon-intensive as American counterparts. This border tax levels the field for American firms that produce cleaner but less profitable products.

During her presidential campaign, Senator Elizabeth Warren outlined her “Green Manufacturing Plan,” to capitalize on an expected $23 trillion market for renewable energy. Senator Warren calls for a $2 trillion investment in renewable energy research, manufacturing, and distribution with guarantees that modules are manufactured in the United States. The United States should implement Senator Warren’s plan so American firms can tap into this emerging market, compete with Chinese manufacturers, and further decrease foreign energy reliance.

The United States, Australia, and Japan announced the Blue Dot Network (BDN) in November 2019 as a thinly-veiled BRI competitor. The partners aim to create an infrastructure asset class by certifying “quality infrastructure” projects and mobilizing trillions of dollars in private funds. The BDN should incorporate robust environmental standards to adequately compete with the BRI. A statement by investors controlling $37 trillion in assets before the UN Climate Change Conference demanded that development be environmentally sustainable, suggesting they will ignore “confidence-building measures” like BDN if environmental standards are not incorporated. Similarly, climate-conscious potential partners in the South Pacific Islands, Southeast Asia, and Europe will probably not bother getting projects certified. Without robust climate standards, investors and potential partner nations will ignore the BDN, becoming an ineffective BRI competitor.

Jake Steiner is a Research Intern at Pacific Forum, a non-profit foreign policy research institute in Honolulu, Hawaii focusing on the Indo-Pacific region. He is also an M.A. Honours International Relations and Economics student at the University of St Andrews in the United Kingdom.