Why Not Trump? The Nobel Peace Prize Finds Itself At War 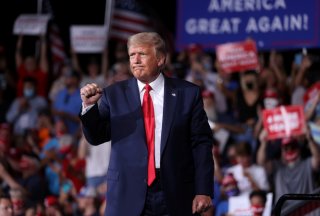 Every year, during an early week in October, the Nobel prizes are announced. Monday starts with Medicine, followed by Physics and Chemistry on Tuesday and Wednesday. On Thursday there are usually a few rolled eyes in the world’s literary salons, but on Friday all hell breaks loose as the Norwegians take center stage to talk about “peace.” It wasn’t always like this. Before the Second World War, a parade of statesmen and bureaucrats made up the bulk of the laureates, with the odd writer and campaigner against “militarism” or some such thrown in. Carl Von Ossietzky, the German pacifist, and Fridtjof Nansen, the Norwegian explorer and League of Nations High Commissioner for Refugees, are among the more interesting awards from this period.

Most of the early awards reflected a fairly conservative commitment to what has become known as “negative peace” in which stability and brokered peace treaties are prioritized over more political claims concerning the causes of war and the conditions of just outcomes. After the Second World War, however, the decision-makers branched out into more “positive” territory taking on a broader scope of issues from food security with Norman Borlaug the American agronomist to environmental security with Al Gore and the IPCC. There were still many awards for brokered peace treaties, but usually the award went to the signatories themselves, hence David Trimble and John Hume for the Northern Ireland peace process and Yasser Arafat, Shimon Peres and Yitzhak Rabin for Israeli-Palestinian accords.

Yet for all the controversies over the years, including the Vietnamese politician, Le Duc Tho, who refused it as his “war wasn’t over yet” (or words to that effect) when awarded it alongside Henry Kissinger in 1973, at least all previous controversies were contingent on actual awards. This year, however, a mere nomination has caused a crisis.

Ordinarily, a mere nomination causes no particular problems. Any university professor, elected member of parliament or former laureate can theoretically enter a nomination, so there is always a range between the distinguished and the disreputable. The committee does not publish the nominations they receive until fifty years later, meaning the debate surrounding them is mostly just hot air. This year, however, President Donald J. Trump has been very publicly nominated by a Norwegian MP, and obviously this cannot be tolerated.

Notwithstanding that Adolf Hitler was nominated in 1938 and Saddam Hussein was reportedly nominated more than once, apparently Trump’s mere nomination has scandalized important members of the opinion-forming elite. So much so that The Atlantic magazine has called for an end to the prize altogether on the authority of one of their junior staff writers, presumably after a morning spent skim reading this and that.

Aside from the onanistic scorn, however, the article makes a couple of important points. The concept of peace is complicated and deeply contested, and nowhere is the argument more focused than in the annual bunfight over the Nobel Peace Prize. Indeed some recent awards have borne the clear stamp of “issue validation” in which the question resolved isn’t so much the greatest contribution to peace in the last year, but the greatest aggregation of personal virtue in respect of the cause with which the laureate is associated. In 2018, for example, the award went to Denis Mukwege and Nadia Murad which highlighted the issue of sexual violence against women in war. Both of the awardees, one of whom was herself a victim of sexual violence, were personally unimpeachable, but they were also almost unknown.

The Problem of Peace

The thinking behind the prize to Mukwege and Murad was to raise awareness of an extremely difficult and routinely overlooked feature of conflict in many parts of the world. It was therefore a deeply symbolic award which placed the issue of sexual violence on the main stage for the first time, and deservedly so. There was also, however, a secondary purpose revealed inadvertently by the Atlantic article, which is simply the need to maintain the integrity of the Nobel Prize itself. Because peace is such a contested political issue some awards attract considerable criticism. Every year, therefore, the Nobel Committee has to keep one eye on how the award will be perceived by, for example, staff writers at The Atlantic, meaning that many awards reveal more about the issues the Nobel Committee imagine we should do more about, than reflect anything actually achieved in the last year.

This approach has served to immunize the Nobel Committee from criticism, but when they occasionally leave the comfort-zone of abstract musings on the nature of true peace, and instead award the prize to someone who has made a significant contribution thereto, they increasingly come unstuck. Never was this more starkly the case than with the elevation of Barack Obama to the status of a Nobel laureate. The official reasoning referred to nuclear nonproliferation and applauded his outreach to the Muslim world—both of which are worthy appeals to a negative conception of peace—but the prize was obviously premature even on its own terms and has probably done more to discredit the prize than any other award in recent history. The prize went from being a bit boring, but worthy, to being unserious and partisan. Geir Lundestad, the committee’s former secretary has publicly admitted that it fell short.

To be fair to President Obama, he was respectful enough of the prize to accept it but always clear he didn’t really deserve it, careful to deflect the praise to the work he thought he was contributing too. Trump, on the other hand, has very publicly speculated whether he would be awarded one, openly suggesting that he deserves to be. It's always difficult to know if Trump is entirely serious when he says this kind of thing or whether he just knows how to wind up his opponents, but this year’s nomination cannot be dismissed entirely. And this is why the mere nomination of Donald Trump this year has proved so controversial: not from anything remarkable about the nomination itself, but from the rather obvious fact that he deserves it.

And the Winner is…

Not that deserving the Nobel Peace Prize has any bearing on being awarded it, but it is worth reconsidering why Trump has a legitimate claim on it. The leaders of Israel, Bahrain, and the United Arab Emirates sitting together on the White House lawn and signing an agreement to grant full mutual diplomatic recognition may not seem like an outbreak of peace between parties not known for recent conflict, but this is a quite a watershed moment in Middle Eastern history. These developments align with wider evolutions in the region’s economic and political outlook, so aren’t entirely a bolt from the blue, nevertheless recognition that Israel has a right to exist is a more solid platform for improved relations than not doing so. For two important members of the Arab League and the Gulf Cooperation Council to embrace Israel into the family of Middle Eastern nations is a stunning development, whether Trump had anything to do with it or not.

Not only that, but Trump brokered this agreement against all expectations and after warnings that his recognition of Jerusalem as the capital of Israel would set the region ablaze. In other words, he showed up the entire class of foreign policy specialists and Middle East watchers as being prisoners of outdated ideas. No one predicted this breakthrough, and yet here we are. The betting odds currently place Trump at 14 to 1, just ahead of the EU (again, though what for is anyone’s guess) at 16 to 1. The current favorite is the WHO, followed by Greta Thunberg, Jacinda Ardern, and the UNHCR, then Trump.

Here is where the Norwegian Nobel Committee faces a dilemma. In all likelihood, they will give in to fashionable left-wing outrage and award the prize to the WHO, despite their evident failures this very year, or perhaps to Greta Thunberg for an emotional speech last year. They may give it to Jacinda Ardern for sounding compassionate while crushing the New Zealand economy, or the UNHCR for not solving any of the problems it was established to address. If they are brave, however, they will reassert the primacy of actual peace negotiations that make a difference to millions of people's lives rather than grand pontification on what exactly peace “is.” If the Nobel Committee simply shrugs and says “despite everything, this Middle East breakthrough is extremely important,” that would show the world that the real prize is always peace not popularity. Indeed, if in the next few weeks further Middle Eastern states emerge to join the new arrangements, then not awarding the prize to Trump may come to be seen as their greatest error yet.

Douglas Bulloch holds a Ph.D. from the London School of Economics and is an international relations scholar based in Hong Kong.