Why Obama’s Raw Attacks on Donald Trump Could Backfire 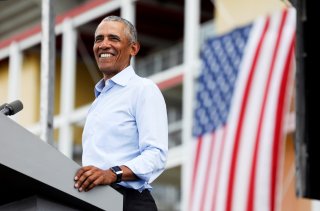 Former President Barack Obama returned to the campaign trail in a two-week blitz to harvest support for the Democratic presidential ticket on Nov. 3, where he’s thrown several personal punches at President Donald Trump — and even seemed a bit euphoric about it. He has abandoned any pretense of post-presidential neutrality, attacking Trump in raw and personal terms.

“Hello Orlando,” Obama yelled, after eagerly jogging up the steps to hit the rally stage in battleground Florida on Tuesday, wearing a black mask with white, beaming font reading “VOTE.”

After greeting the drive-in crowd and recalling a Democratic defeat in 2016 when the state voted red, Obama presented a fresh offer for the state to “set two things right.”

The former president’s remarks come with a flood of strikes that mock and dig into Trump’s presidency With a needling approach designed to evoke a response from the president.

“What’s his closing argument? That people are too focused on covid. He said this at one of his rallies: ‘Covid, covid, covid,’ he’s complaining,” Obama said, referring to Trump’s comments on the media’s approach to covering the deadly disease. “He’s jealous of covid’s media coverage.”

Obama went on to address the recent coronavirus outbreaks on Capitol Hill including at Judge Amy Coney Barrett’s Supreme Court nomination event at the Rose Garden and Vice President Mike Pence’s sudden swarm of infected workers in his office.

“Last week, when Trump was asked if he’d do anything differently, you know what he said? He said: Not much, not much. Really?! Not much? You can’t think of anything that you might be doing differently, like maybe you shouldn’t have gone on TV and suggested we might inject bleach to cure covid?” Obama said. “That’s not something you said, you know, ‘Maybe I shouldn’t have said that?’"

But Trump was apparently watching Obama’s speech in the Sunshine State, as he took to Twitter saying, “@FoxNews is playing Obama’s no crowd, fake speech for Biden, a man he could barely endorse.”

At another Biden-Harris rally on Monday, Obama referred to some foreign policy-related issues, as Trump claimed that Russia’s Vladimir Putin, China’s Xi Jinping and North Korea’s Kim Jong Un all want a Republican White House in November. The former president acknowledged this and giggled, “We know! We know because you’ve been giving them whatever they want for the last four years. Of course they want you to win. That’s not a good thing. You shouldn’t brag.”

So much for former first lady Michelle Obama, “when they go low, we go high” credo.

But some observers say Obama isn't out of bounds. “Obama is acting like most presidential surrogates do in most presidential campaigns. He is leaving it to the candidate to put forth a positive vision and policy proposals. He is taking on the task of criticizing the opposition,” Rogers M. Smith, professor of political science at the University of Pennsylvania, said. “That’s been the standard playbook in American electoral politics for generations.”

“As a former president with high popularity, Obama is arguably Biden's most effective surrogate. He is also no longer a sitting U.S. president, and so can adopt a more partisan tone if he chooses,” Daniel Hopkins, also a professor of political science at the University of Pennsylania, said.

Obama’s last-minute efforts on the trail in swing states indicate a massive push to make the case for Biden’s presidential candidacy in hopes to sway battleground voters in states like Florida and Pennsylvania to resurface voting behavior from when he ran for president when both states voted blue.

But the thrusts at Trump don’t align with Biden’s overall message: to serve as a unity candidate to join a divided and broken Capitol Hill and country. Quite the contrary.

“As a surrogate, he’s reminding voters of the deficiencies of the opposing candidate,” Smith said. Biden, in other words, remains in Obama’s shadow. Trump will not be slow to seize upon this.