Will Joe Biden's Big Lead in the Polls Vanish Like Hillary Clinton's? 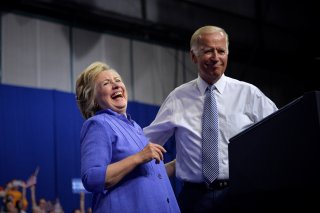 President Donald Trump must loathe looking at the daily polls.

Less than 100 days from the presidential election, and presumptive Democratic nominee Joe Biden takes a massive lead over Trump -- but this isn’t unusual for the president.

In 2016, Democratic presidential candidate Hillary Clinton held an average lead of 5.7 points, or 84 percent, in 44 polls between January and early June, but obviously lost the presidential bid, according to the University of Virginia Center for Politics. Four years later, Biden carries a 5.9, or 94 percent, lead in 72 national polls between the same time period.

FiveThirtyEight reported Biden has a 8.3 percent national lead as of Monday, with Biden at 50.2 percent and Trump at 41.8 percent. Although there’s still a lifetime in politics before the election, this margin is wider than Clinton ever reached in 2016, and steeper than Barack Obama’s lead over John McCain in 2008.

The Center for Politics and FiveThirtyEight noted that Clinton’s domination in the polls was often unstable and smaller than Biden’s lead.

“Joseph Biden’s lead over Donald Trump has been far more consistent in 2020. This consistency may reflect the fact that Donald Trump is now running as an incumbent with a proven track record. When an incumbent like Trump is running for reelection, the election is mainly a referendum on the incumbent’s performance,” Center for Politics wrote.

“Applying our current polling-average methodology to 2016 polls, Clinton led national polls by an average of about 4.0 points four months before the 2016 election, and 3.8 points on Election Day itself. So while a normal-sized polling error was enough to throw the 2016 election to Trump, it would take a much bigger — and much unlikelier — polling error for Trump to be ahead right now,” FiveThirtyEight wrote.

As election day approaches, however, the race for the presidency could become more competitive. Biden leads in a number of swing states including Minnesota, Michigan, New Hampshire, Wisconsin, Florida, Arizona and North Carolina, but, according to FiveThirtyEight, many of the swing states tend to “lean more toward Trump than the country does.”

Fox News released polls Friday with Biden up in Pennsylvania, Minnesota, and Michigan with 11, 13, and 9 points, respectively.

If Trump gives a killer nomination acceptance speech, improves his handling of the coronavirus or his approval rating jump, it’s likely that these states, in particular, will shift their votes to Trump, giving him the Electoral College votes despite Biden’s overwhelming national popular vote.

The Washington Post reported that although Biden’s doing well in red states like Arizona, Florida and Texas, “in the blue states Trump picked up in 2016, Biden is faring worse than Obama and Clinton did.”

“Densely white, blue-collar states in the Rust Belt are trending more Republican, while, thanks in large part to migration trends, states such as Arizona and Texas are trending more Democratic,” The Washington Post wrote.

Rust Belt states have boosted their support for Biden, but a lot can change in the next three months.