750 Million Genetically Modified Mosquitoes to Be Released Into Florida Keys 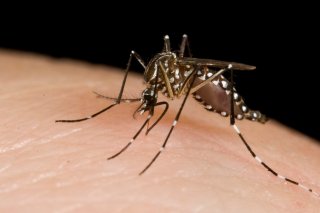 More than 750 million genetically modified mosquitoes received final approval from local authorities to be released into the Florida Keys over the next two years.

The approval by the region’s Mosquito Control District comes on the heels of the Environmental Protection Agency (EPA) green-lighting an experimental use permit that granted the British-based, U.S.-operated biotech company Oxitec permission to release these mosquitoes out into the wild.

Oxitec’s mosquito—also known as OX5034—is a genetically modified version of the Aedes aegypti, a type of mosquito that can carry dangerous diseases like the Zika virus, dengue fever, chikungunya, and yellow fever.

The pilot project is aiming to see if these genetically modified mosquitoes can be a viable alternative to spraying insecticides to control the Aedes aegypti population.

The OX5034 has been specifically engineered to produce female offspring that die in the larval stage—well before hatching and growing large enough to potentially spread disease. Only the female mosquitoes bite for blood, while the males feed only on nectar.

In 2009 and 2010, local outbreaks of dengue fever largely left the Florida Keys Mosquito Control District desperate to find new options. Large-scale efforts that ranged from backpack spraying to using mosquito-eating fish did little to curb the Aedes aegypti population, which makes up only 1 percent of all mosquitos in the region.

The modified mosquito also won federal approval to be released into Harris County, Texas, beginning in 2021. However, state and local approval for the release there has yet to be granted.

“This is an exciting development because it represents the ground-breaking work of hundreds of passionate people over more than a decade in multiple countries, all of whom want to protect communities from dengue, Zika, yellow fever, and other vector-borne diseases,” Oxitec CEO Grey Frandsen said in a statement in May.

Despite the public health-focused intentions of the project, there have been plenty of objections showcased by both local residents and environmental advocacy groups.

“With all the urgent crises facing our nation and the state of Florida—the coronavirus pandemic, racial injustice, climate change—the administration has used tax dollars and government resources for a Jurassic Park experiment,” Jaydee Hanson, policy director for the International Center for Technology Assessment and Center for Food Safety, said in a statement.

“Now, the Monroe County Mosquito Control District has given the final permission needed. What could possibly go wrong? We don’t know, because EPA unlawfully refused to seriously analyze environmental risks, now without further review of the risks, the experiment can proceed,” she added.