Americans Are Not Ready to Go to War for Ukraine 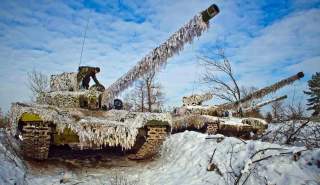 Secretary of State Rex Tillerson committed what amounts to an unconscionable sin in the eyes of many foreign policy watchers when he wondered aloud two weeks ago during a meeting in Lucca, Italy, "Why should U.S. taxpayers be interested in Ukraine?"

The Washington Post’s Anne Applebaum responded with an emphatic, “Yes, Rex Tillerson, U.S. Taxpayers Should Care,” but conceded, with an eye to Tillerson’s corporate roots:

There is no calculation, no balance sheet that can prove any of this. There is nothing that would appeal to a CEO or his shareholders. Whatever we have “invested” in Ukraine...will not show an immediate profit. To see the value of a secure, pro-Western Ukraine, you have to see the value of an alliance going back 70 years.

Richard Haass, president of the Council on Foreign Relations, stressed that abandoning Ukraine to Vladimir Putin’s tender mercies could spur more states to pursue nuclear weapons. Ukraine was encouraged, under the Budapest Memorandum of December 1994, to relinquish its nuclear weapons after the collapse of the Soviet Union, in exchange for security assurances from both Russia and the United States.

Putin clearly reneged on that commitment with his annexation of Crimea and continued meddling in eastern Ukraine. If Americans didn’t care about Ukraine in the face of such aggression, Haass writes, it would send “a terrible message to other leaders: that giving up nuclear weapons can be hazardous to your political health and territorial integrity.”

Such responses to Tillerson’s offhand comment (one of his aides characterized it as a “rhetorical device”) reflect deep-seated ideas about the importance of U.S. treaty commitments, as well as a quasi-religious belief in the United States’ purported commitment to international norms. For the men and women who have led U.S. foreign policy for the past several decades, this is the very essence of what makes America exceptional. As Madeleine Albright explained “We are America. We are the indispensable nation. We stand tall. We see further into the future.” More recently, Hillary Clinton spoke of “certain commitments” including, for example, to our NATO allies, “that need to be embedded in the DNA of American foreign policy.”

But U.S. leaders are on shaky ground when lecturing others on the importance of adhering to international agreements and respecting the territorial integrity of sovereign states. Even Richard Haass admits as much. “The fact that both Iraq and Libya were invaded,” Haass writes, “after they gave up their nuclear programs—and that a nuclear-armed North Korea has not been attacked—is a lesson lost on no one.”

Meanwhile, many Americans do care when innocent people are being slaughtered by their own governments, or jailed on dubious grounds. They object when countries attack their neighbors. On the other hand, U.S. leaders often encourage the public to look the other way when U.S. allies are committing such abuses (e.g. Egypt, Turkey, and Saudi Arabia). Such responses obviously complicate the claim that Americans should and do care very deeply about certain fundamental principles—except when they shouldn’t and don’t.

And it is here where we can see a sharp disconnect between foreign policy elites and the public at large, a divide that Donald Trump ruthlessly exploited with his “America First” rhetoric during the campaign, and in the earliest days of his presidency.

One may discount the accuracy of such polls. Given a high “not sure” response rate, it would be reasonable to predict that public sentiment would change if a president forcefully called for U.S. military action. Still, we cannot ignore that, for most Americans, defending the security of others is not the essence of what makes America special. Indeed, it ranked dead last in a list of twelve possible “very important” foreign policy goals in the latest Chicago Council on Global Affairs poll.

Today, some of the widest gaps can be seen between Republican elites and Republican voters. The poll, taken before the November election, found that 71 percent of GOP leaders counted “defending our allies’ security” as “very important,” whereas just 36 percent of rank-and-file Republicans felt the same way.

In general, Americans care about others, but they rarely care enough to risk American lives in the service of certain principles. It isn’t even clear that most Americans would be willing to pay higher taxes, or accept cuts in popular domestic spending programs, as a sign of their caring for others’ security.

We may celebrate or lament such public sentiment. But we shouldn't ignore it. And Secretary of State Tillerson should be praised, not excoriated, for daring to ask an essential question.

Image: Flickr/Ministry of Defense of Ukraine.