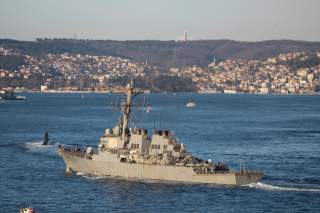 If the Pentagon’s 2021 defense budget request were a person, a psychiatrist would label him “conflicted.” That diagnosis comes from the high number of unresolved issues bubbling just below, or in some cases, above the surface.

Part of the stress stems from trying to accomplish too many tasks with insufficient resources. Other pressure comes from trying to make the turn from counterinsurgency to great power competition much more quickly than the Department of Defense (DoD) typically operates.

The remaining conflict stems from the Department’s effort to balance near-term and far-term risk. The way the DoD is organized, services with their “train and equip” responsibility worry more about far-term risk, while combatant commanders get paid to think about the close-in risk: What if, for example, North Korea comes south, or if Russia crosses into Estonia … tonight?

Case in point: In a bid to save money, the Air Force announced a plan to retire dozens of airplanes early. Among them are 23 KC-10 and KC-135 air-refueling tankers, to be replaced by the much-delayed KC-46 Pegasus tanker. (2023 is now the soonest the planes will be considered combat-ready). Such as decision makes perfect sense if you are a service that worried more about investing for the future and are willing to tolerate a near-term dip in capacity.

It’s rare for a combatant commander to openly criticize a Pentagon budget decision. And yet another example just occurred as well.

Just three days after the Missile Defense Agency released its 2021 budget with a plan to develop a next-generation interceptor for the Ground-Based Midcourse Defense System (to replace the canceled Redesigned Kill Program) — a "clean sheet" plan that would require years of development — the commander of U.S. Northern Command, Air Force General Terrence O'Shaughnessy, blasted the proposal in testimony before the Senate Armed Services Committee, stating he “can’t wait 10 years to get the Next Generation Interceptor fielded.” O’Shaughnessy is naturally concerned with North Korean ICBM launches that could happen tomorrow. Now the Pentagon is scrambling, just weeks after the budget release, to come up with a plan “B,” something that will satisfy combatant command needs sooner.

Latent tension also exists in the Army’s budget as it struggles to accomplish its long-term modernization aspirations while improving current readiness and supporting combatant commander peacetime needs. Army leaders have consistently stated their force is too small to accomplish the National Defense Strategy at anything less than high risk, and Army units are spinning quickly — in some cases at a 1:1 ratio of deployed/home station time, as a consequence of a need to rotate forces to and from Iraq, Europe, Kuwait, Afghanistan and South Korea.

An example of the pressure on the Army budget can be found in arguably the one major procurement program that branch has achieved success with in the last five years: the Joint Light Tactical Vehicle, or JLTV, the planned replacement for the ubiquitous HMMWV. The Army owns more than 100,000 HMMWV that have given good service but lack the most basic of protection necessary for the modern battlefield. The vehicle is a part of every Army brigade combat team. Now, just as the JLTV has passed the threshold to full-rate production, the Army drastically reduced planned procurement quantities, down to about 1,900 in 2021, from a planned purchase from just a few years ago of around 3,000.

The cut reflects the pressure the Army is increasingly finding itself to fund its six long-term modernization priorities in the face of a declining budget. At their current rate, the Army will not reach their acquisition objective of some 49,000 JLTV until the mid-2040s. By the 2040s, the JLTV will be as relevant as a 1996 Ford Taurus is today.

Circling back to the Air Force, despite impressive drops in the price of the F-35A fighter — down to now $79.2 million in 2021 and falling, as well as the fighter finally coming of age with full cutting-edge capabilities — the service opted not to ramp up production of the fighter. It chose instead to only request 48 F-35A fighters in 2021, down 12 from the 2020 buy. This despite the service stating in September 2018 that they needed 386 total squadrons by 2030 to execute the National Defense Strategy with any degree of confidence. The F-35A is currently the most dominant fighter in the world and a highly desirable capability for theater commanders. Meanwhile, the research and development account in the Air Force is at an all-time high.

But perhaps the service with the most unresolved strain is the Navy. The service is caught in a steel vise, with their own internal force structure assessment telling them they need to achieve a 355 ship “battleforce” fleet to execute their assigned missions. The 355-ship requirement is also codified in public law and as a campaign promise of the current commander in chief. But the 2021 budget request actually buys four fewer ships than last year’s, notably cutting a planned buy of a Virginia-class submarine and a future frigate.

It shouldn't be a surprise; study after study has told the Navy that to procure, man, and train a fleet of that size requires a budget substantially bigger than the one they are planned to receive. Early congressional budget hearings are already tearing into DoD leaders over this obvious contradiction. Defense Secretary Mark Esper has suggested that one path to getting to 355 might be found in unmanned or lightly manned ships. But it’s not so much the number that matters, as the capabilities that 355 ships provide. That’s where the focus needs to remain.

The 2021 defense budget request contains a number of unresolved and difficult issues. Navigating them will require Congressional and Pentagon leaders to keep an unblinking focus on moving towards the military force that accomplishes the National Defense Strategy with the least amount of risk.

But it’s even harder than that. Tough decisions also have to be made to balance between near-and far-term risk and to account for ever-present, even growing, budget pressures. It’s graduate-level work. With mounting national debt, the challenge to find funding commensurate with daily workload and the implications of great power competition will grow more daunting.

Even though it's an election year with the inevitable accompanying distractions, congressional debate and engagement on these subjects are more necessary than ever.

LTG Thomas Spoehr (U.S. Army, Ret.) is the Director of the Center for National Defense at The Heritage Foundation (heritage.org).