A Berlin Strategy: How Should America Respond to China’s Taiwan Threats 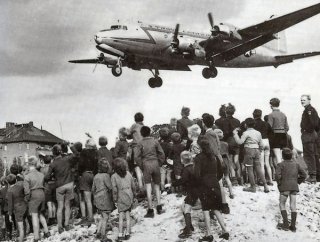 How do you succor a beleaguered ally menaced by a totalitarian antagonist that surrounds it?

By courting risk—and by imposing risk on that antagonist.

The United States must embrace risk for its strategy vis-à-vis an increasingly domineering Communist China to succeed. Fortunately for makers of American strategy, the Cold War past furnishes ample precedent for how to manage risk in the Indo-Pacific in the here and now.

I speak of Berlin.

In the aftermath of World War II, ravaged by strategic bombing and Soviet Army rapine, the German capital found itself an enclave stranded within Soviet-occupied eastern Germany. Postwar Allied cooperation—such as it was—broke down by mid-1948. As the Iron Curtain clanged down across Eastern Europe, Great Britain, and the United States merged their occupation zones in western Germany, the Harry S. Truman administration articulated a doctrine for combating communist insurgencies in Greece and Turkey, and Secretary of State George C. Marshall gave an address at Harvard announcing an economic recovery plan to help Europe recuperate from war. Washington and London introduced a new currency—the Deutschmark—in their sectors and West Berlin, while British, French, and U.S. leaders began negotiating to found the new German state that would become known as the Federal Republic of Germany.

Josef Stalin’s regime in Moscow did not take kindly to Western policy moves aimed at helping Europeans stand against communism. After discovering the Western powers’ scheme to create a West Germany, Moscow broke off participation in the Allied Control Council that administered Germany and introduced its own currency—the Ostmark—in the Soviet occupation zone and East Berlin. The partition of Germany calcified. In June 1948, more provocatively, the Soviet government blocked all surface traffic between West Berlin and the western zones. Logistical support via canals, railways, and roads came abruptly to a halt. The metropolis was left without supplies of food, fuel, and electricity and in danger of starving.

The Berlin Blockade was on.

A Western reply soon followed. It had to according to General Lucius Clay, the commander-in-chief of the U.S. European Command: “There is no practicability in maintaining our position in Berlin and [our position] must not be evaluated on that basis . . . . We are convinced that our remaining in Berlin is essential to our prestige in Germany and in Europe. Whether for good or bad, it has become a symbol of American intent.” For Clay the city had taken on outsized political import. Short of using armed force, though, how could the West answer the Soviet challenge? Well, in 1945 the Allies had negotiated air corridors connecting Berlin with the western zones. Western strategists hit upon a way to use air power to resupply the city while daring Moscow to project its siege skyward.

The Berlin Airlift—twin endeavors codenamed Operation Vittles by the U.S. Air Force (and Navy) and Operation Plainfare by Britain’s Royal Air Force—displayed several characteristics noteworthy for today. First, Western air forces used unarmed transport aircraft unescorted by fighters to ferry matériel to the city. U.S. commanders had 104 transports at their disposal, chiefly C-47s capable of hauling three tons of foodstuffs or fuel per trip. At the operation’s height a relief plane touched down at Berlin’s Tempelhof Airport every 45 seconds. U.S. aircrews logged 189,000 missions and 92 million miles delivering supplies before the airlift came to its end in 1949.

The Berlin Airlift was a nifty feat of aerial diplomacy as well as an errand of mercy. It wrongfooted the adversary. As the U.S. State Department historian notes, Washington “calculated that if the Soviets opposed the airlift with force, it would be an act of aggression against an unarmed humanitarian mission and the violation of an explicit agreement.” The “onus of igniting a conflict between the former allies would be on the aggressor.” Moscow would be culpable—glaringly so—not just for trying to starve German families but for preventing their salvation. That’s not a good look diplomatically.

Western aircrews, then, accepted grave personal risk for the sake of diplomatic gain.

Second, the Soviet armed forces were not inert during the Berlin Airlift. Soviet fighter planes and ground defenses sometimes opened fire in the vicinity of cargo planes transiting the air corridors. Searchlights sometimes swept over planes making their way to the city, temporarily blinding their pilots. But while harassment constituted part of the rules of the game, Soviet defenders refrained from making overt attacks. By the spring of 1949, it became obvious that such tactics would not deter U.S. or British aviators from accomplishing their mission. The balance of risk favored Western air forces.

But third, the airlift was not wholly humanitarian in nature. The U.S. Air Force supplied a mailed fist in case the Soviets opted to interrupt the relief effort. Atomic-capable B-29 bombers deployed to British airfields as a deterrent to mischief-making. It’s doubtful the Truman administration would have launched doomsday attacks against the Soviet Union had U.S. transports been shot down. The B-29 deployment nonetheless signaled that the atomic option was on the table should the Soviet government turn back or assault relief flights. The U.S. nuclear monopoly remained in place in 1948–1949—albeit not for long—lending extra heft to sotto voce threats out of Washington.

Nor did Berlin’s lessons for U.S. strategy in Asia end with the blockade. General Clay’s words remained as pertinent throughout the Cold War as when he uttered them during the blockade. The city still commanded political significance out of proportion to its economic and military value, the latter of which was nil. Accordingly, the U.S. Army stationed a brigade there throughout the twilight struggle between West and East. Not because a single brigade stood any chance against East German and Soviet forces encircling them should war come, but to put Soviet Bloc leaders on notice that the United States would fight for Berlin. In other words, the Berlin Brigade announced that the West had skin in the game of Berlin’s defense—just as it had in 1948–1949. Thankfully Moscow never put that pledge to the test.

Now, admittedly, the Berlin analogy doesn’t apply perfectly or with equal force to every possible contingency in the Western Pacific or China seas. The Senkaku Islands, to name one point of contention between the U.S.-Japanese alliance and Communist China, is an uninhabited archipelago in the East China Sea. In time of war, the Japan Self-Defense Force could garrison the islets, and the garrison could find itself stranded and in need of relief. But a rescue effort vis-à-vis modest numbers of combat troops wouldn’t have the same emotional resonance as saving hundreds of thousands of civilians from going without food or heating fuel. Even so, revisiting the principles underlying the Berlin Airlift could apply a catalyst for creative thought.

If China’s People’s Liberation Army (PLA) ever lay siege to inhabited territory, on the other hand, the Berlin Airlift might more directly inspire a counterstrategy. Taiwan—Formosa itself, or one of the outlying islands—is an obvious example. Taiwan is populated by some twenty-three million folks who have made their island an economic and cultural showcase. And unlike Berlin, a former archfoe’s seat of power, the Republic of China has been a friend to America for many decades. It commands sympathy.

So if the PLA ever mounted a naval blockade of Taiwan, interdicting resource shipments the islanders need to subsist, it might be time to reopen the Cold War playbook for insight. Once again an aggressor would be trying to starve a civilian populace into submission. Once again the avian option might prove effective, thrusting the burden of choice—the choice whether to fire on unarmed cargo aircraft bearing relief—onto Beijing. Chinese Communist Party magnates could stand aside. Or they could interfere and reveal anew how callous they are. And once again, showing everyone that the United States has skin in the game of protecting its allies and friends could give a potential aggressor pause.

This is a playbook worth updating for new times.

James Holmes is J. C. Wylie Chair of Maritime Strategy at the U.S. Naval War College. His books appear on the U.S. Navy and Marine Corps Professional Reading Lists. The views voiced here are his alone.