‘The Sandbaggers’ Is the Best Spy Show Ever Made 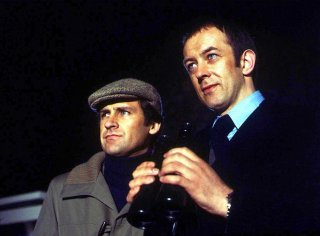 The Sandbaggers, a British spy drama that aired just 20 episodes between 1978 and 1980, is hands-down the best T.V. show ever about espionage.

It’s set mostly in a London office. There are a mere handful of gunfights. There is no sex, little alcohol, no harsh language. When they do venture outside their offices, two of the most important characters prefer to hang out in a McDonald’s sipping coffee and munching hamburgers.

The Sandbaggers sounds boring. It’s not. Set in the U.K. Special Intelligence Service—a.k.a., MI6—at the height of the Cold War, the deceptively staid little show is all about decision-making. And it rightly depicts decisions as potentially life-altering, world-changing acts.

Who should know what and when. Who may talk to whom and how. Where to direct limited resources and with whose knowledge. How much risk is acceptable given the likely outcomes of a particular course of action. These are the substance of The Sandbaggers.

It’s a realistic show because it’s ambivalent, unpredictable and frequently unsettling. The good guys don’t always win—and when they do win, it’s not always because of their own actions. In the dangerous world of The Sandbaggers, major characters die abruptly, meaninglessly and sometimes even off-screen.

Over and over again, the spies in The Sandbaggers explicitly remind each other that they are not James Bond. Their work is not glamorous. They’re not destined to survive and succeed, because they’re not heroes and there’s no script.

Only there are scripts, of course—unusually good ones. The Sandbaggers was created and written by Ian Mackintosh, a former Royal Navy officer whose previous drama Warship is also a cult classic. Mackintosh died in a mysterious 1979 plane crash. His spy show died with him, ending on a cliffhanger at the end of its third series.

While The Sandbaggers occasionally indulges the audience by actually showing SIS’s agents in action—sneaking across Soviet territory, infiltrating a terrorist camp in Cyprus or thwarting Iraqi hijackers—the real drama takes place almost entirely at the desk of Neil Burnside, SIS’s director of operations, played with a deeply-suppressed snarl by Roy Marsden.

Burnside is divorced. He doesn’t drink. He briefly dates a girl during The Sandbaggers’ first series but it ends, well, badly. His only friend—if that’s the right word—is his CIA counterpart Jeff Ross, portrayed by Bob Sherman. But it’s hard to tell if Burnside and Ross actually really like each other.

No, they need each other—and are careful to maintain their “special relationship” in pursuit of, as Burnside puts it, “the utter destruction of the KGB.” Ross admits that the CIA is “sloppy … but rich.” He needs SIS’s expertise. SIS for its part is always starving for funds and relies on the CIA’s manpower and technology.

Burnside oversees three “Sandbaggers”—special direct-action operatives. In the pilot episode, a Norwegian spy plane has crashed in Soviet territory and the Norwegians, lacking experienced agents of their own, want the Sandbaggers’ help rescuing the crew.

Burnside is reluctant—it’s too risky. But for political reasons his superiors order him to send in two agents, including the veteran Sandbagger One, played with quiet confidence by Ray Lonnen. But the Norwegians, piquing at the Brits’ recalcitrance, also ask for CIA assistance … and fail to inform SIS of the duplicative request.

The result is a disastrous special ops collision behind enemy lines that nearly gets Sandbagger One blown up. The CIA team and the Norwegians come to a bad end and the SIS men barely escape. Burnside flies to Oslo for a one-minute meeting with the Norwegian spy chief.

One minute is all he needs to make it very clear how badly the Norwegians have behaved—and what the repercussions could be in the titanic Cold War struggle.

Burnside goes to great lengths to protect his Sandbaggers, but he also doesn’t hesitate to risk their lives when the mission is important, the information is good, the access is adequate and, perhaps most importantly, SIS can cover its tracks.

Fundamentally, The Sandbaggers is about the process of weighing outcomes, gathering info, ensuring access, attributing success and denying failure. It is, in other words, about planning.

When the planning goes well and takes into account all contingencies, SIS usually succeeds in rescuing hostages, escorting Warsaw Pact defectors or stealing foreign military secrets. When the planning goes poorly, agents and allies die. Sometimes horribly. Sometimes in conditions of such secrecy that Burnside and his Sandbaggers alone must carry the whole burden of guilt.

In the first episode of series two, Burnside sends Sandbagger One to comfort the grieving parents of a dead Sandbagger. The agent fibs with practiced ease, telling the parents their son perished in a plane crash while working as a courier for the Ministry of Defense.

In truth, Sandbagger Two got shot in the spine while trying to escort a defector across the Bulgarian border—a risky mission forced on Burnside and SIS by the politicians.

The young agent lay dying, alone and in excruciating pain, in a filthy Bulgarian safe house. Hurrying to his rescue, Burnside and Sandbagger One realized there was no way to carry their injured comrade to safety without doubling his pain—and likely killing him in the move. They resolved to end things … their own way.

Sitting in a park, debating the finer points of some other ill-conceived bureaucratic initiative that could also have dangerous real-world consequences, Burnside and Ross realize their greatest foes aren’t really the Soviets, but their own budget-cutting, election-obsessed, incompetent politicians.

They must accept that their struggles will never end as long as the politicians are politicians and the Russians are Russians. Ross frowns at the remains of his burger. “The CIA should have stock in McDonald’s,” he mutters. And so should the Sandbaggers.

They endure. Not so much because they love their governments, but because they hate the enemy, especially the KGB. But Burnside dresses his hatred—and his self-loathing—in the trappings of duty, honor, service. Only his secretary Diane, portrayed as steely loyal by Elizabeth Bennett, sees through the disguise.

“People think a Sandbagger is some sort of superman,” Diane tells Burnside in a rare moment of candor in the second episode of series two. “You feel you can’t be loved or wanted for the person you are, so you have to create a false person, one who is more committed, more dedicated than anyone else.”

Burnside doesn’t deny the accusation. He quietly lives with it, just as he lives with the deaths resulting from decisions he makes—or decisions he fails to prevent others from making—in the best spy show ever made.